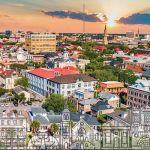 A century into Charleston’s preservation movement, the conversation has shifted beyond buildings to the less tangible concept of “livability”—which means what, exactly, and to whom?