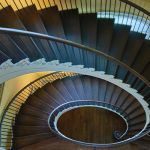 Preservation’s Progressives: As Historic Charleston Foundation turns 75, on the heels of the Preservation Society’s centennial, what is the future of protecting the past?