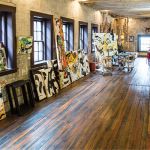 Mountain Made: Amble along the Blue Ridge Craft Trails to discover the creative spirit of the North Carolina mountains

Discover a road map to more than 300 artist studios, galleries, and other cultural points of interest across the 25-county region