Dining Out the New Normal 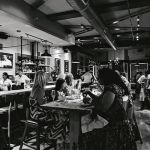 Dining Out, The New Normal: A look at the effects of the pandemic on Charleston’s renowned restaurant industry

How local food and beverage pros are working through the many challenges, and what you can do to help