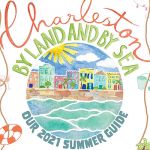 Relish every sun-drenched moment with insider tips on the beaches; aquatic adventures; outdoor concerts; and places to eat, drink, and chill in the AC—plus plenty of #VeryCharleston outings to fill your days. Let’s go!