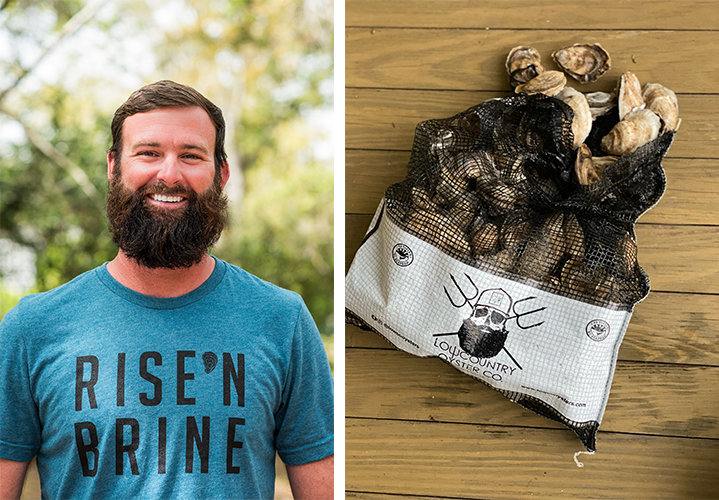 PHOTO: (left to right) Trey McMillan founded Lowcountry Oyster Co. in 2017; his Lowcountry Cups are cage-farmed single selects, grown in the waters of the ACE Basin.

Harvested by: Lowcountry Oyster Co.
Where they grow: Founder Trey “Cricket” McMillan pulls cage-farmed singles from the waters of the ACE Basin.
Where to find them: Delaney Oyster House, Gabrielle, and Tempest, among others; or have them shipped to your door 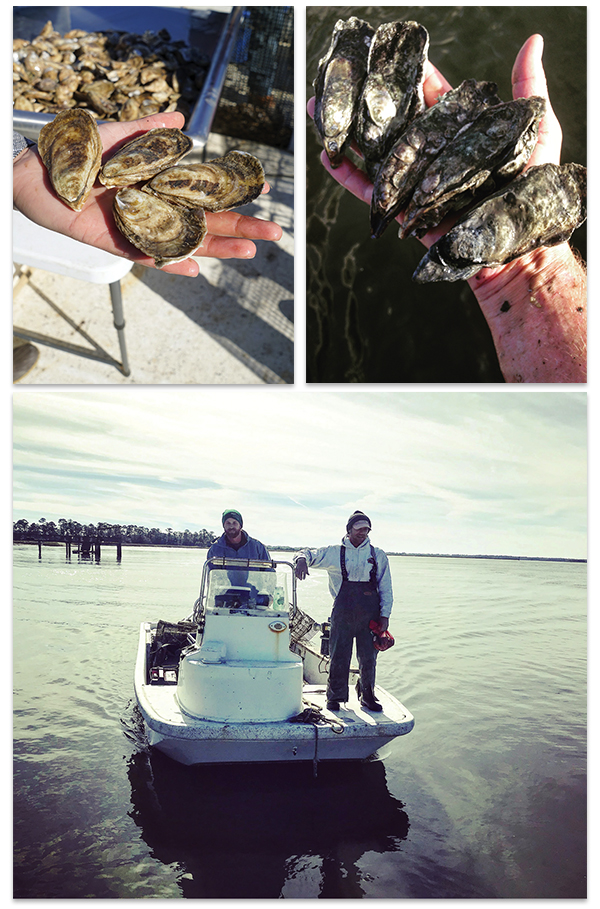 PHOTO: (clockwise from top left) Mosquito Fleet Petites - Grown from Lady’s Island seed oysters, these full-bodied beauties have a teardrop-shaped body; Stono Selects - Plucked from the wild, the oysters are culled into singles and grown out for several weeks in off-bottom cages; The Bierce brothers head back to the landing on Sol Legare Road after checking and culling their Stono River cages.

Harvested by: Charleston Oyster Farm
Where they grow: Raised in off-bottom cages on the Stono River just around the bend from the ocean; soon to come are wild selects, still fattening
Where to find them: 167 Raw and NICO 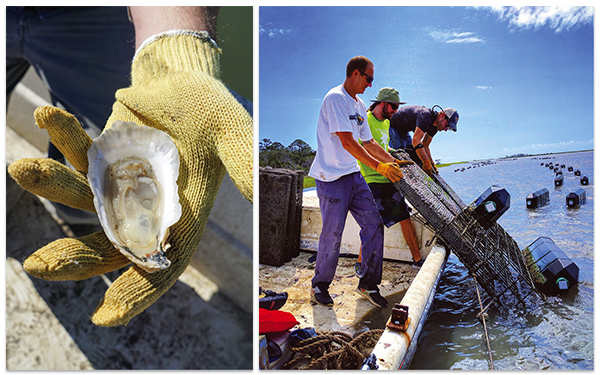 PHOTO: (left) Sea Cloud; (right) The young team at Barrier Island Oyster Co. hoists floating cages to harvest pearly white Sea Cloud singles. The name refers to a nearby historic plantation as well as the pristine color of its shell.

Harvested by: Barrier Island Oyster Company
Where they grow: Raised in surface cages adjacent to Fig Island (home to ancient shell rings) near Botany Bay
Where to find them: 167 Raw, The Obstinate Daughter, and Rappahannock Oyster Bar

PHOTO: Frank Roberts of Lady’s Island Oyster launched South Carolina’s first and only oyster hatchery (above left); in addition to growing his own singles in the deliciously high salinity of Beaufort’s tidal estuaries, he supplies growers up and down the coast with baby oyster seed.

Harvested by: Lady’s Island Oyster
Where they grow: Raised in surface cages by Frank Roberts on Coosaw River on the edge of St. Helena Sound, Phat Ladies are “finished” in a sub-tidal current to make them more robust.
Where to find them: The Ordinary is exclusive carrier of Phat Ladies; Single Ladies can be found at Amen Street, The Darling, Fleet Landing, Langdon’s, NICO, and Oak Steakhouse. 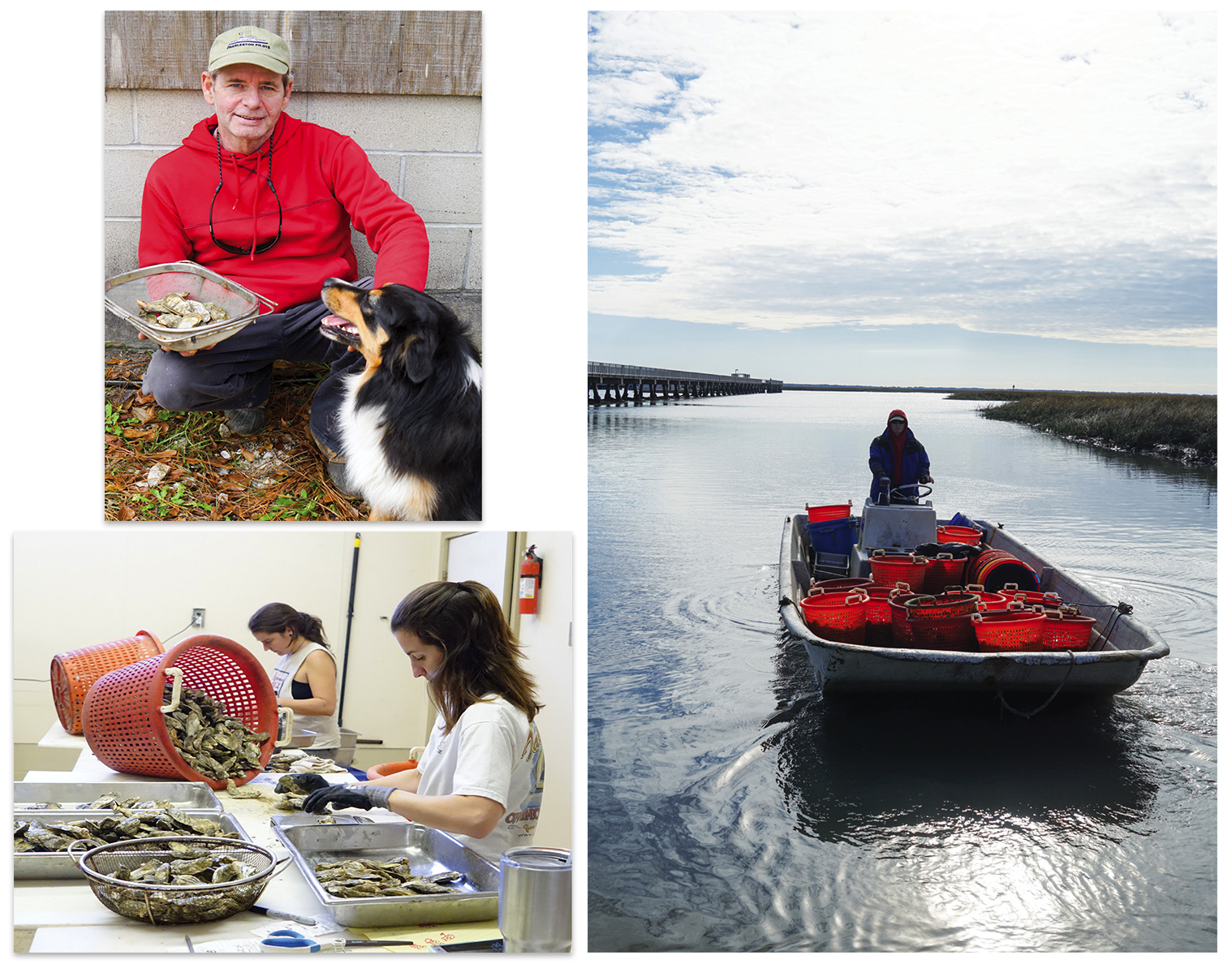 PHOTO: (clockwise from top left) “Clammer Dave” Belanger could just as well go by “Oysterman Dave” but the nickname stuck. His Caper’s Blades were the first local boutique singles to hit Charleston’s fine-dining tables; Each morning Belanger and his assistants don wet suits (right) and launch from Garris Landing to head out to their lease behind Dewees Island to plant shell and harvest both oysters and clams; After the day’s harvest, oysters are pressure washed and chiseled, or “sculpted” as Belanger likes to say, before being individually weighed and sorted (below) at Belanger’s processing center in McLellanville.

Harvested by: Clammer Dave Sustainable Gourmet
Where they grow: Harvested from wild beds behind Caper’s Island, “finished” in resting cages behind Dewees Island
Where to find them: Hank’s, High Cotton, NICO, Obstinate Daughter, and The Ordinary; Clammer Dave sells directly to the consumer as well. 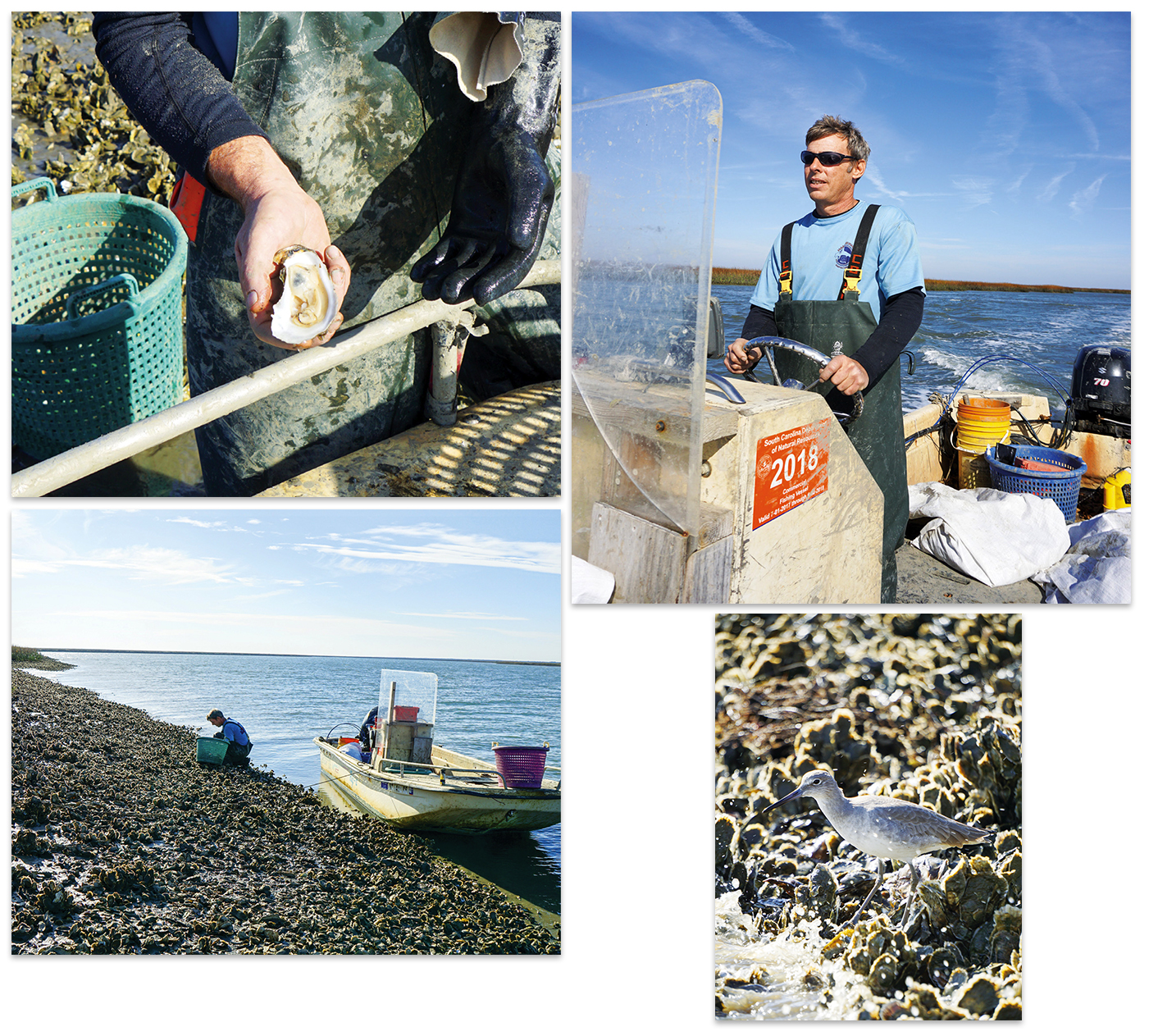 PHOTO: (clockwise from top left) When hunger strikes, a raw oyster makes a fine snack; Jeff Spahr and his harvesting team could easily pick 40 bushels of oysters per day, but they typically stop at 10 to 20 bushels in order to keep their beds healthy; Spahr motors into a labyrinth of marsh by Bulls Bay to hand select Eagle Points; A scavenging willet stays close by, hoping for scraps.