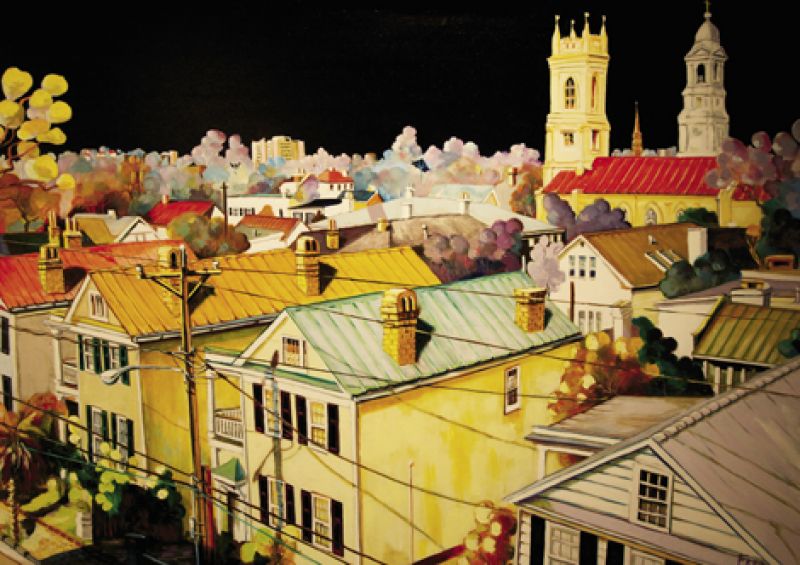 Nearly 56 years ago, aboard a shipping freighter as a Merchant Marine, Fred Jamar found himself desperate to paint. Scrounging oil paint used to color-code pipes from the engine room and making a brush from old clothing, the Belgium native stretched a discarded tarp over a scrap wood frame and painted the ship carpenter’s wife from a photo.

“Starting at 15, I just felt an urge to paint,” says Jamar, who recalls “commissions” for beer and cigarettes aboard the ship, where he’d arrived fresh from the Belgian Maritime College. “I’ve painted on anything and everything—cardboard, wax paper, wood. I never thought I would sell pieces for money.”

Yet today, painting is Jamar’s full-time career, taken up in the 15 years since he retired as an international risk management analyst for J.P. Morgan & Co. After living around the world, including in Paris, Brussels, Frankfurt, London, and New York, he settled in Charleston in 1997.

“Here, wherever you look, you can imagine a painting,” says the artist, whose other-worldly yet realistic style was highlighted on the Cooper River Bridge Run poster in 2002. He became a stalwart of Piccolo Spoleto and began having an annual exhibit at Robert Lange Studios (this year’s will be in August), finding his Charleston cityscapes in particularly high demand. His trademarks are night-simulating “Prussian blue” skies and “lollipop trees,” an embellishment whose roots he attributes to a subconscious mimicry of impressionist Paul Gauguin.

Jamar’s paintings begin with charcoal sketches, followed by five-or-so days of progressively adding layers of oil. “I’m more interested in the process than the result,” he says. “I have to force myself to not be too detailed.”

His works have been called “lonely,” evoking the feeling of an abandoned street late at night. But throughout his life, he’s painted people, including a series of portraits adorned with clown makeup (among them, Bill Clinton) completed in 2001. Humans are left out of his Charleston scenes simply because customers often requested that he remove them. Although he includes power lines, trash cans, and parking signs, he eliminates cars because “they date a painting.”

Recent works reflect his curiosity about unconventional canvas sizes, including tall, elongated pieces that he calls “slices of Charleston,” designed to squeeze into wall space between windows or in corners.

Despite managing a constant stream of commissions, Jamar laughs at the notion that his passion be considered work. “It’s not a job,” he says. “Art keeps you young. When you’re painting, you forget about pains and aches; you float. Even when I’m painting something I know, such as Charleston, everything is like a dream.”