Taking the Stage
July 2010
Seventy-five years ago, DuBose Heyward and the Gershwin brothers took a chance on Broadway with Porgy and Bess 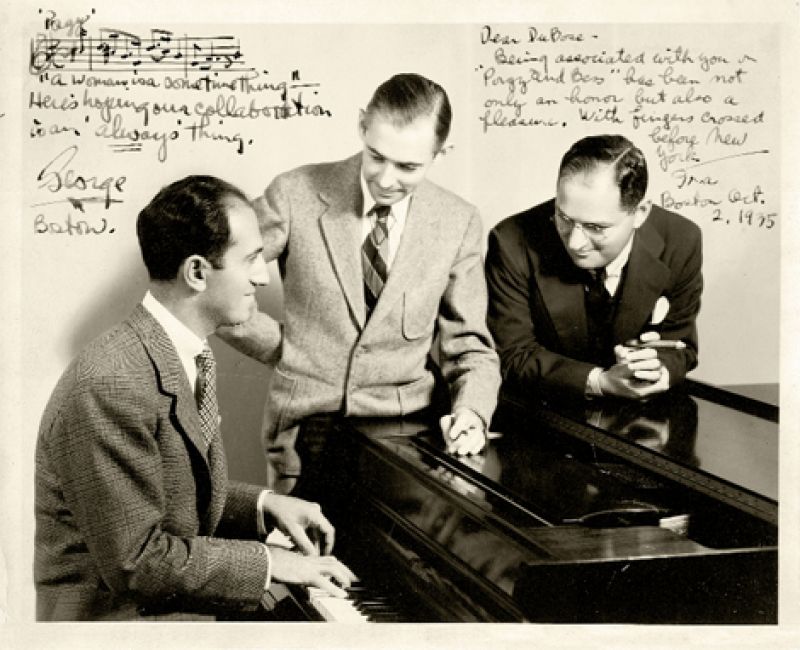 It was quite a heavy load for a goat cart: love for a fallen woman, a belief in impossible odds, and a song to the city of Charleston. That’s what DuBose Heyward’s Porgy carried on stage with him when the opera Porgy and Bess, cowritten with George and Ira Gershwin, premiered in 1935.

Seventy-five years later, as productions of Porgy and Bess proliferate to celebrate this anniversary, the renown of this American classic is undeniable. But it was no sure thing when the Gershwins, in a pun on the opera’s song “A Woman is a Sometime Thing,” signed this photo for Heyward at the Boston tryout. Like the opening scene at Catfish Row, Porgy was a crap shoot. Would audiences be swept up in this tale of a crippled beggar falling in love? Could Porgy become “an ‘always’ thing”?
The story had defied expectation since Heyward first read a news article about Sammy Smalls fighting over a lady in 1924. “From contemplation of his real and deeply moving tragedy,” penned the Charleston writer, “sprang Porgy,” published in 1925.

Then George Gershwin stepped in, arriving at Folly Beach in 1934 to write a toe-tapping musical score with lyrics by Ira and DuBose. The opera opened in New York in October 1935 on a Broadway stage (inset). The realism of life in a Charleston slum was shocking. But Gershwin was considered a composer for musical comedies, not grand operas, and the public didn’t take to the work as anticipated. Porgy’s luck ran out. Heyward and the Gershwins lost their investments, and though the opera became a global sensation with its revival in the 1940s and ’50s, George and DuBose died without witnessing its phenomenal success. But the production’s hometown surely did. Forty-five years after Todd Duncan and Anne Brown brought the title characters to vivid, pulsing life, Charleston finally saw a staging of the opera from June 25 through July 8, 1970, during the city’s 300th birthday celebration.