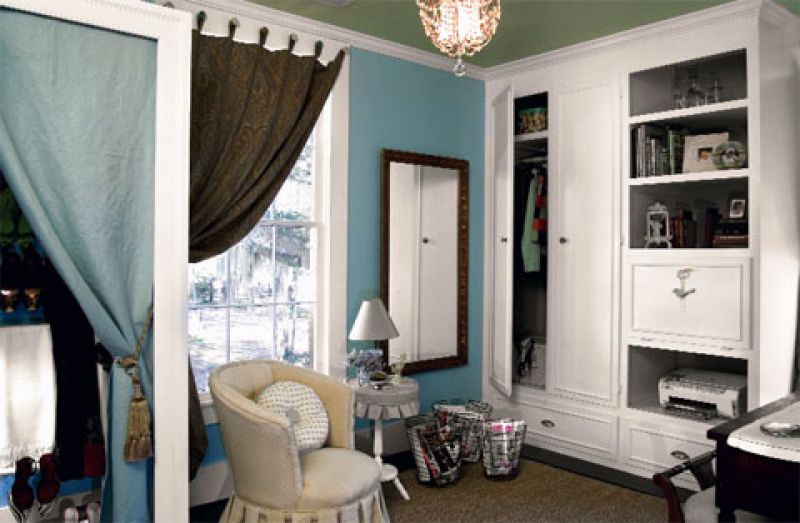 When faced with the task of giving new purpose to an oddly sized spare room, interior designers Angie Artigues and Terri Baldwin looked past an old electric pink backdrop. “The main problem with this space was that there was no particular function to it,” says Baldwin, noting that it was originally part of a larger bedroom that had been split in two. “This room is considerably smaller than the other and became a catch-all for everything.” The duo set out to transform the awkward space into feminine dressing quarters, updated for a busy mom’s schedule. Along with providing ample room for her everyday wardrobe, they incorporated storage for out-of-season clothes, a vanity table, and even a computer workstation. Bright pink wall paint dominated the tight quarters, making the room seem even more cramped. Awkward dimensions make it difficult to assign a definitive purpose to the space, while bare windows made the room appear cold and impersonal.­ Built in the early 20th century, the house lacks storage closets, so clutter builds up quickly. 1. Keep It Behind Closed Doors: Priority one was giving the owner’s various wardrobe and dressing items a place of their own. This secondary closet, closed off by sea-green fabric panels, offers storage for off-season clothing and shoes. 2. Create a Sense of Privacy: The designers used leftover fabric belonging to the homeowner to fashion a single tieback curtain for the window, which shields the room from harsh light and exposure to passersby. “The windows in this old house stretch very low to the floor, so we also added a window seat to address the odd proportions,” says Baldwin. 3. Become a Bargain Hunter: The main light source in the room was a bare lightbulb that hung from the ceiling and was operated by a pull cord. Baldwin and Artigues opted for an inexpensive replacement in the form of this petite chandelier from Lowe’s, along with a reading lamp on an end table. 4. Make It Practical: Updating the idea of a woman’s private dressing quarters, the design team included a fold-down desk for her workstation in the plan. “Every time the owner wanted to work on her computer, she’d have to clear off space at the kitchen table,” says Artigues. “This room gives her laptop and printer a permanent spot in the house.” 5. & 6. Fine Tune the Details: The designers spotted several mismatched vintage doorknobs and decided to put them to work. One serves as a tieback for the curtain, which hangs from a handful of other knobs installed in a row along the top of the window frame. In the closet, an old magazine rack is repurposed to hold shoes. Budget Snapshot A look at the designers’ key investments: • Paint & painting supplies: $119.84 • Construction of storage closets: $222.28 (materials); $850 (labor) • Reupholstery: $75­ • Area rug: $50 • Light fixture: $84 Where they shopped: • Lowe’s, Currents (Pawley’s Island), Celadon, and Ross