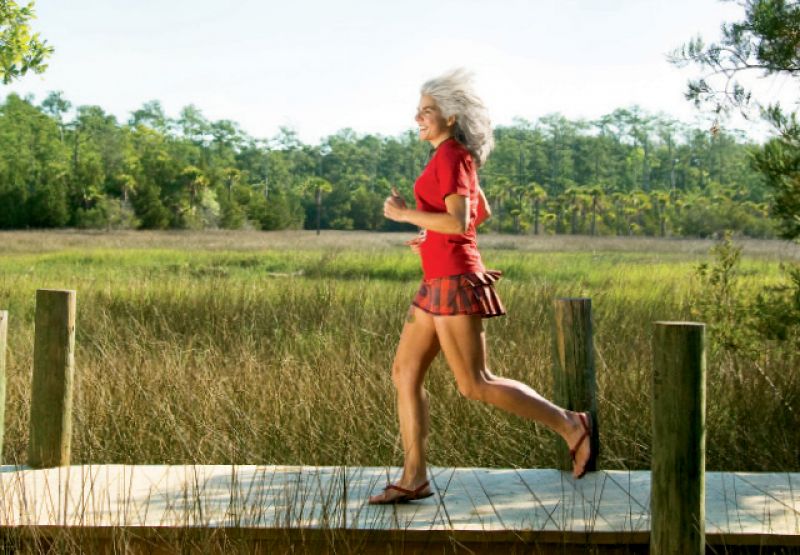 Running sandals and an athletic skirt are the go-to gear for Jackson, shown here at Palmetto Islands County Park.

Running more than 100 miles in 24 hours, through the night, through the rain, through hunger and sleep deprivation: for most, that’s torture. But for 45-year-old Karen Jackson, it’s just another Saturday. When this mom isn’t managing her family’s Santee hardware store, she’s running ultramarathons (races longer than 26.2 miles), having completed more than 60 since 2012. This summer is no exception: she has six endurance events ahead and will put 530 miles on her running sandals in July alone.

CM: When did you start running?
KJ:
When my kids were little in the ‘90s, I needed something to do to get in shape. Running was cheap and convenient.

CM: How did you get into longer distances?
KJ:
I originally thought I’d never do more than a 10K. Then I woke up one day and said, “I think I’m ready to run a marathon.” My first ultra was a 50K trail run in 2011. Afterward I thought, “That is the most awful thing I’ve ever done.” But once I’d recovered, all I could think was, ”Wow, I survived that, now how can I improve on it?”

CM: You’ve won and placed numerous times—are you competitive?
KJ: When I set out for a race, I have a goal—a certain time or number of miles—and if I reach it, I’m happy. If somebody beats me on my best day, they deserve to.

CM: Why do you wear running sandals?
KJ: I like that I barely notice them. When your whole foot is encased in fabric and rubber, you’re constantly hitting your toes in the end of the shoe. I rarely lose toenails or get blisters. My feet are happy, my legs are happy, my back’s happy.

CM: What’s next on your schedule?
KJ: I’m doing the Hell Hole Hundred El Diablo starting June 5 (a 60K night run plus 100 miles the next day). In July, I have the Vol-State 314-mile road race in Tennessee followed by the Triple Cremator in Beaufort (three 50-mile days). The next weekend is the Mattamuskeet Death March in North Carolina—you do about 66 miles carrying a five-pound ammo can.

CM: How do you rest afterward?
KJ:
If I have the luxury of a day off work, I’ll get in a hot bath with some Epsom salts. I’ve been known to sleep for 14 hours straight, or watch ESPN for hours on end.

Longest race: She was the first finisher of the inaugural 367-mile Tarheel Ultra in 2013. It took her seven days, five hours, 51 minutes, and 18 seconds.