Rainbow Row
April 2015
WRITER:
Suzannah Smith Miles
The 13 adjoining houses making up what’s known as ”Rainbow Row” are today one of the city’s most photographed landmarks. They were built on East Bay Street starting in the mid-1700s, hosting shops on the ground floor with merchants’ residences above. Legends abound about the origins of their cheery color palette: One claims the distinctive shades were necessary to help drunken sailors determine which house they were to sleep in, and another suggests they aided illiterate folks in locating the store they needed. In fact, the hues aren’t as historical as all that, though they do have their roots in the Holy City preservation movement that began gathering steam in the 1920s 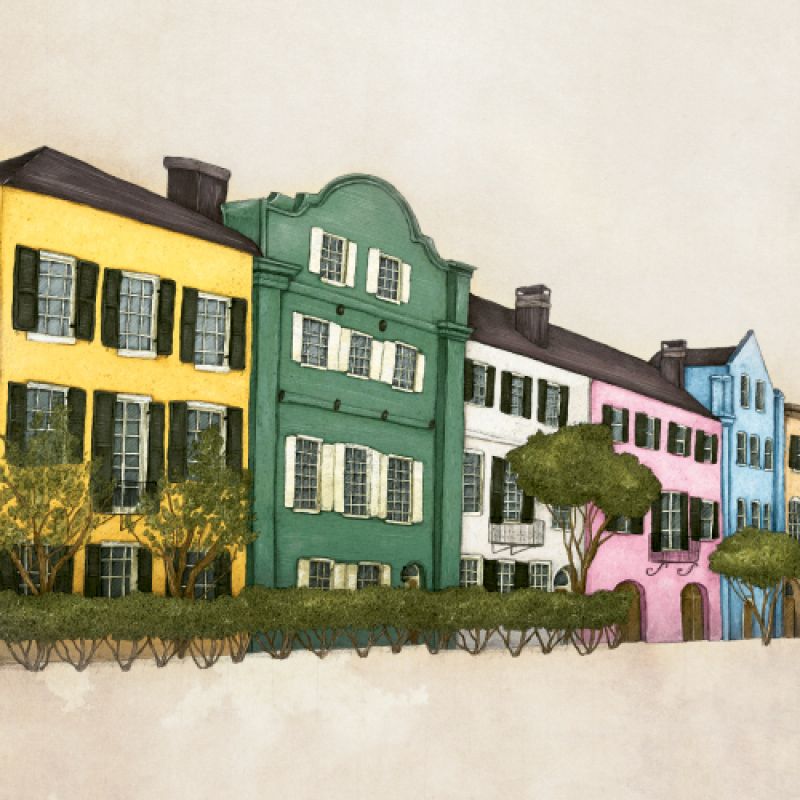 Hot Line
Constructed between the 1740s and 1845, Rainbow Row’s buildings are joined by common walls like typical row houses, yet most boast architectural individuality and their own roof lines.

Waterfront Property
When these storied structures went up, East Bay was the commerce center of the city. Docks came right up to the street, and ships carrying goods from all over the world were moored virtually at the buildings’ doorsteps. It made sense then that the bottom floors hosted businesses, while the upper levels were living quarters for the merchants, with private entrances accessible by stairs from courtyards at the rear.

Ruins to Riches
Like much of Charleston after the Civil War, these houses were in ruins when Charlestonians Susan Pringle Frost and Dorothy Haskell Porcher Legge launched a successful effort to purchase and revitalize them. Eventually, hundreds of buildings would be restored through the organization Miss Frost founded in 1920, the Society for the Preservation of Old Dwellings, still active today as the Preservation Society of Charleston.

Colorful Past
The name “Rainbow Row” was coined in the 1930s after the restoration of 99, 100, and 101 East Bay, which Legge painted pink to reflect Charleston’s close ties to colonial Caribbean architecture. As subsequent houses were fixed up, their owners followed in kind, selecting the blues, yellows, greys, and greens that create the scene we admire today.