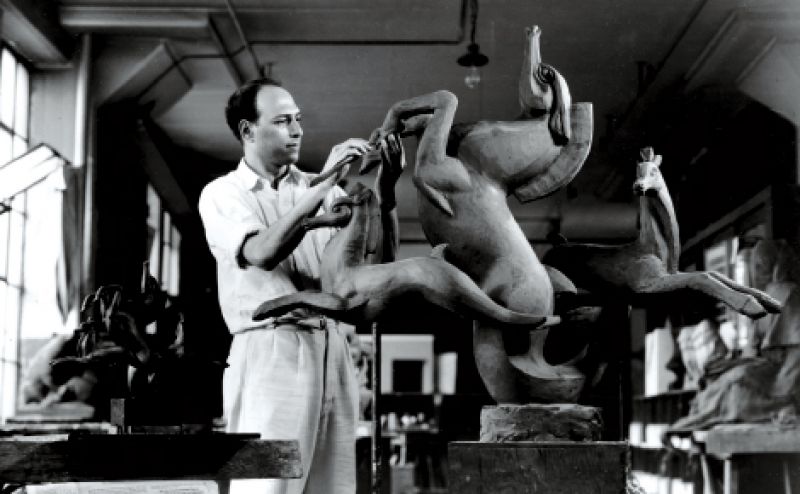 Every day in Charleston, we’re not only faced with history, but with the faces of those who made it. They look at us from busts and bas reliefs in parks and public buildings. There’s Mendel Rivers at the County Office, the Native American chief at Charles Towne Landing, Saul Alexander in the public library, and countless others. Now the man who made them, faceless to many, is about to be recognized—albeit a bit belatedly. On September 21, the Gibbes Museum of Art launches an exhibit of works by sculptor Willard Hirsch, who, like those he immortalized, helped transform this city.

Born in Charleston in 1905, Hirsch graduated from Charleston High in 1923. He began at the College of Charleston, but his father’s death required him to go to work without graduating. Five years later, he moved to New York City, and there, an aunt saw him making figures with molten candle drippings. Recognizing his talent, she paid his tuition to the National Academy of Design. He then took classes at Manhattan’s Beaux-Arts Institute and maintained a studio for a decade, winning prizes and exhibiting around the country.

After serving in the U.S. Army for two years, Hirsch returned to Charleston in 1944 and opened a studio at 17 Exchange Street, where he built Charleston’s first kiln for casting plaster and terra-cotta. While creating his own art work, he also taught adults and children, establishing the Charleston Art School with painters William Halsey and Corrie McCallum from 1953 to 1965. He married Mordenai Raisin, daughter of Beth Elohim’s beloved Rabbi Jacob S. Raisin, and they raised son Jacob (Jack) and daughter Jane on Broad Street.

Hirsch, who died in 1982, had a reputation as a curmudgeon with strong opinions. Yet he was also a punster who appreciated wit, and his laughter was a gift. In fact, it may be his whimsy that is most enjoyed around the city. Anyone who’s sipped from the fountain at the Battery and noticed the Little Dancer’s bare toes or seen Falling Angel throwing her arms up in glee behind the Gibbes has glimpsed Hirsch at his playful best. Though many of his works on religious themes are somber and awe-inspiring, humor slips in as well—for example, Jonah, housed locally at Synagogue Emanu-El, shows the man relaxing inside the whale’s mouth.

“Never make ashtrays,” he stormed at his students. For Hirsch, sculpture was only to portray the living. He loved all creatures—creating a tiger at Clemson and bulldog at SC State—and turned Charleston’s worship of  ancestors into a pun by carving a bas relief of four bears, calling them his “forebears.” Just as he made clay and bronze beings seem alive, so Hirsch animated our city with his humor and love of the human condition.