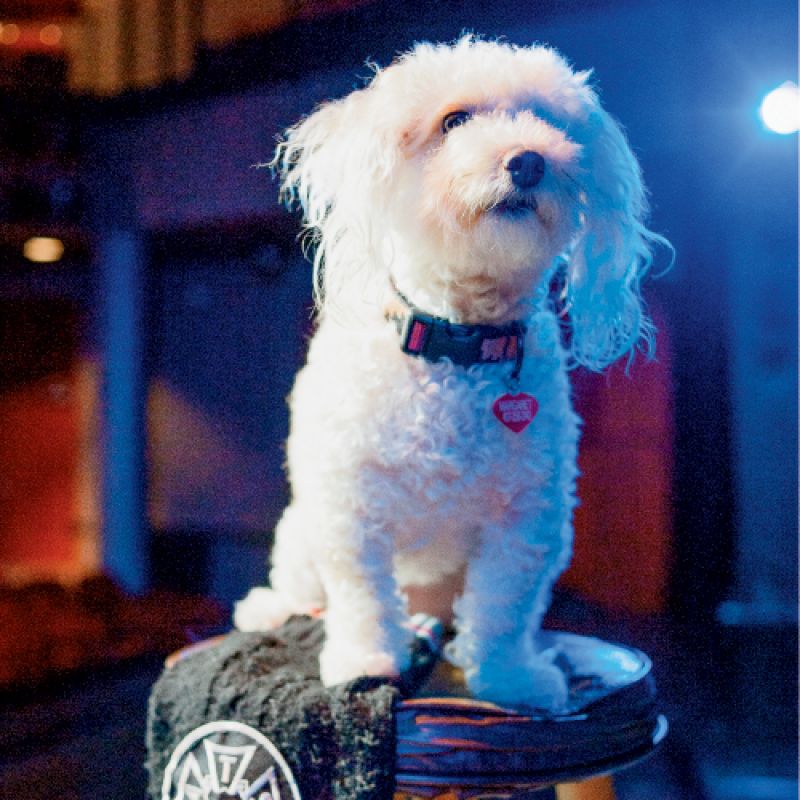 Concertgoers at Charleston Music Hall have likely noticed the tiny white dog lying patiently by the light board. The one-eyed, five-year-old Maltese poodle named Margaret is happily at work with the venue’s technical director, Dany Kapp. In a room that hosts orchestras and folk musicians (where audience silence is integral to the show), one might wonder about the wisdom of bringing a dog. But in years of running sound and lights everywhere from the Dock Street Theatre to the North Charleston Performing Arts Center, Kapp says Margaret has spoken up only twice: responding to the frequency of a trombone during a pre-concert sound check (she howled) and during a play when a doorbell rang on the set (she barked, in the endearing manner of a nine-pound dog).

Kapp, who’d been wanting a small, hypo-allergenic dog that could ride to work with him (on his bicycle) in a backpack, heard about Margaret on the radio and went directly to the Charleston Animal Society. The little pup fit the bill to a T, one eye and all. “She’s been to every theater in town,” says Kapp. “It’s amazing; I’ve never known such a chill, all-around good dog.”

Although Margaret steals the show (the folks at the Music Hall even made koozies with her image that read, “Margaret Lives”), she’s willing to share the spotlight. Megan Ladd, who handles the box office and marketing, is a former manager at the Pour House, where she inherited Dirty, a presumed dachshund/Chihuahua mix found rummaging through the trash behind the venue (hence his name). An escape artist known for swallowing sandwiches and burritos bigger than himself, Dirty soon became a Pour House fixture, even inspiring Dave Matthews Band veteran Tim Reynolds to write and perform a song in the pup’s honor.

Like the Music Hall itself, Dirty and Margaret reflect a diversity of tastes and styles. When the lineup is rock ’n’ roll, rambunctious Dirty is ready to party, and when the time comes for an evening of jazz, ‘Margaret lives.’ Just don’t ring the doorbell.