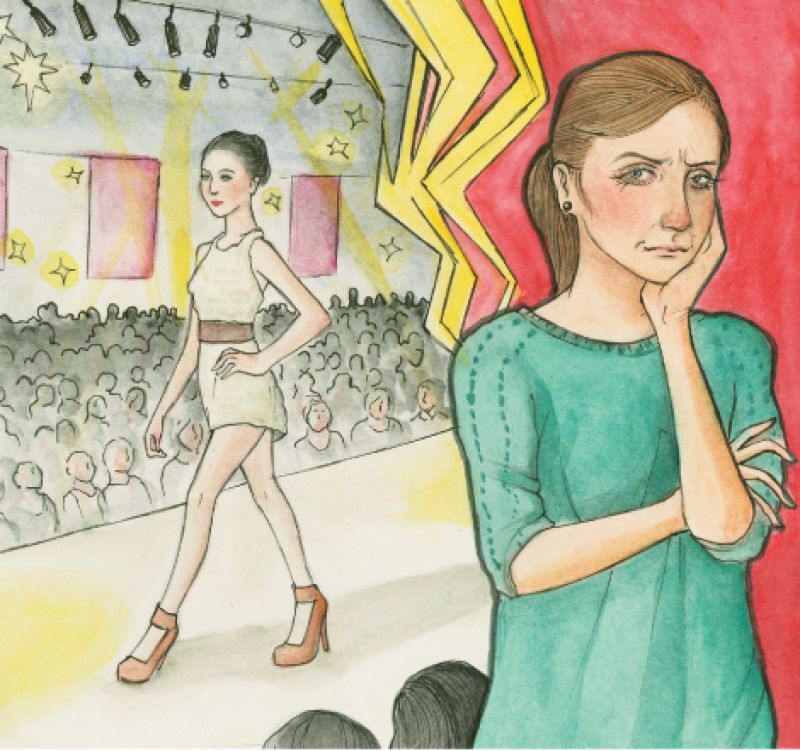 I am a mother of three girls, sister of two sisters, daughter of a former model, and daughter-in-law of a former model. Women—specifically attractive, well-groomed women—have been my family milieu. My mother, a famed May Queen in her day, had impeccable taste and always looked fabulous, even if she was going to Harris Teeter in sweats. My mother-in-law can turn a baseball cap and turtleneck into chic Glamour must-haves. Yet despite hailing from decidedly stylish stock, I am a fashion flunky. I’ve never paid more than $30 for jeans. I’d be less baffled reading The Economist in Mandarin than reading W or Vogue. I simply don’t get it.

I am a feminist, an athlete, a semi-tomboy who reluctantly slept in pink foam curlers, at my mother’s insistence, every Saturday night until high school. Maybe that’s what scarred me. I know that appearance doesn’t matter—and that it does. I teach my girls the pitfalls of vanity. I tell them that they are strong, smart, and capable; that character doesn’t show up in the mirror; that lip-gloss is just that—gloss. I rant about sexism and the demeaning objectification of women. “Look at pitiful Lindsay Lohan,” I warn. They nod their heads and send me links to the J.Crew dresses they like.

I must admit I saw it coming. From their earliest “dress-up” days, my two oldest girls, now sophisticated teenagers with carefully curated closets, have always loved anything shimmery and swirly. There was the months-long stage when Sally, at age four, insisted on wearing her beloved long, white, ruffled party dress everywhere we went, day after day—to the park, to preschool, to the grocery. And when Hayley, in second grade, would squeeze into too-small shorts and rig a bathing suit top à la Britney Spears. I growled and grimaced when they went from smocked to smut in the blink of an eye, but they were always, unquestionably “in style.” Now that I have two full-fledged fashionistas, one of whom lives for Charleston Fashion Week, my comeuppance is complete.

I will never forget the torture of accompanying Sally to her first CFW model casting call. She was a freshman in high school, underage, and needed parental consent to participate, so I spent a Saturday morning waiting in an endless line for her to audition. She was one of hundreds of hopeful young people, mostly women—all tall and thin; hair pulled back in tight, high ponytails; butts stuffed into tight, low jeans; and feet crammed into high, high heels. My arches ached just to watch.

Three hours later, Sally was finally next in line for her 35-second opportunity to strut her stuff in front of the judges and hopefully win a spot in the CFW “book,” from which designers and boutiques would select their models. I cringed watching her subject herself to this shallow, appearance-based critique. To me it seemed brutal, barbarian, and went against the grain of everything I’d ever tried to teach my girls. To Sally, it was magic. I was the nauseated, nay-saying wicked stepmother; she was the excited, bright-eyed Cinderella. And wouldn’t you know it, her high-heeled slipper fit.

I’ve now been to two CFW shows, and this year hope to be in the audience a third time, to watch my model daughter glide down the runway. That first year, the first time she appeared, she was halfway through her “walk” before I recognized her—her hair gussied up, her make-up glitzy and professional, her stage-presence confident and, well, gorgeous. She was so in her element that I couldn’t help but be proud. Very proud. And now, despite fretting about being dowdy and under-dressed when I walk into the Marion Square tents, I too look forward to the flash and swank of CFW, to seeing my daughter do her thing down the runway.

I hope I’ve taught her that it’s not about what you wear or how you appear, but how you wear it and who you are. And she’s taught me that a little attitude, hair spray, and a sassy wink at the camera ain’t such a bad thing. Still, those skyscraper stilettos? That’s another matter altogether.