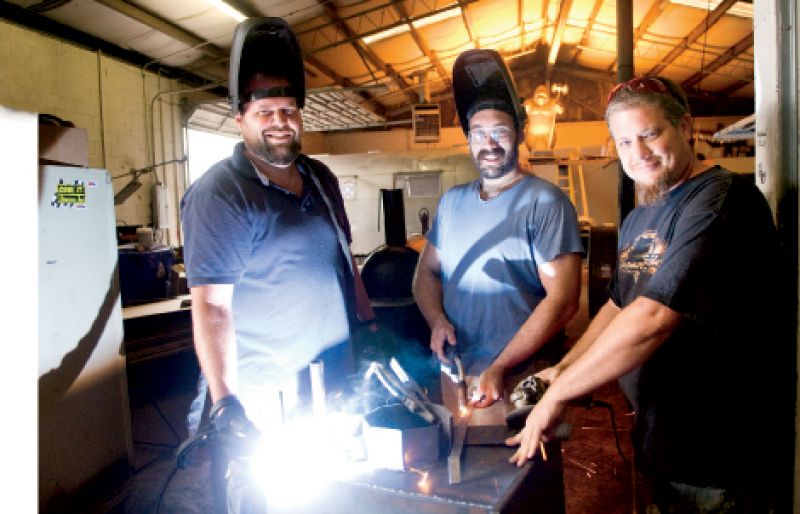 You’ve probably seen them—the Coastal Crust and Coastal Craft & Cru trucks made from handsome antique vehicles. With the former outfitted with a pizza oven and grill and the latter with a draft beer tower and espresso machine, they’ve been the talk of weddings and events around Charleston for months. But many don’t realize that these eye-catching creations were constructed by a trio of industrious friends in a warehouse along Dorchester Road that happens to be presided over by a giant fiberglass ape.

Begun in 2009 as a backyard hobby making grills to sell on eBay, Gorilla Fabrication is now the full- (and over-) time occupation of Bill Tillson, Shane Cantey, and Dusty Brant. Over the last two years, they’ve designed and shipped countless smokers and grills around the country, including several shaped like pink pigs. More recently, they’ve become the go-to spot for the city’s food truck fleet, from creating a massive, 27-foot “cook anything” trailer for Jim ’N Nick’s Bar-B-Q to a fully equipped blow-out bar in a ’65 Airstream for Lava Salon.

“We’re able to do everything in-house,” says Tillson, whose next project is a coffee bar being driven from Spokane (and back) for a customer who found them online. “By integrating plumbing and electrical into the design, we can build from the ground up, in one place.”

Tools of the Trade
Building giant rigs from scratch requires the right equipment—here are some of Gorilla Fabrication’s essentials
----------------------------------------
CNC Plasma Cutter: Draw an elaborate shape on the computer, and this machine will cut it out of a sheet of metal by melting it. “It’s saved us thousands of hours already,” says Tillson.
Sheet Metal Bender: Cantey inherited this massively heavy tool that bends metal at any angle from his grandfather, who used it for 52 years.
Welding Machines: The pieces make the whole. “These get worked like dogs,” says Tillson.
Giant Box Fan: Metal work is hot work.
Three Super-High-Powered Brains: “It’s one thing to have the tools, but you have to have the ability to imagine a completed project before you start,” says Tillson.