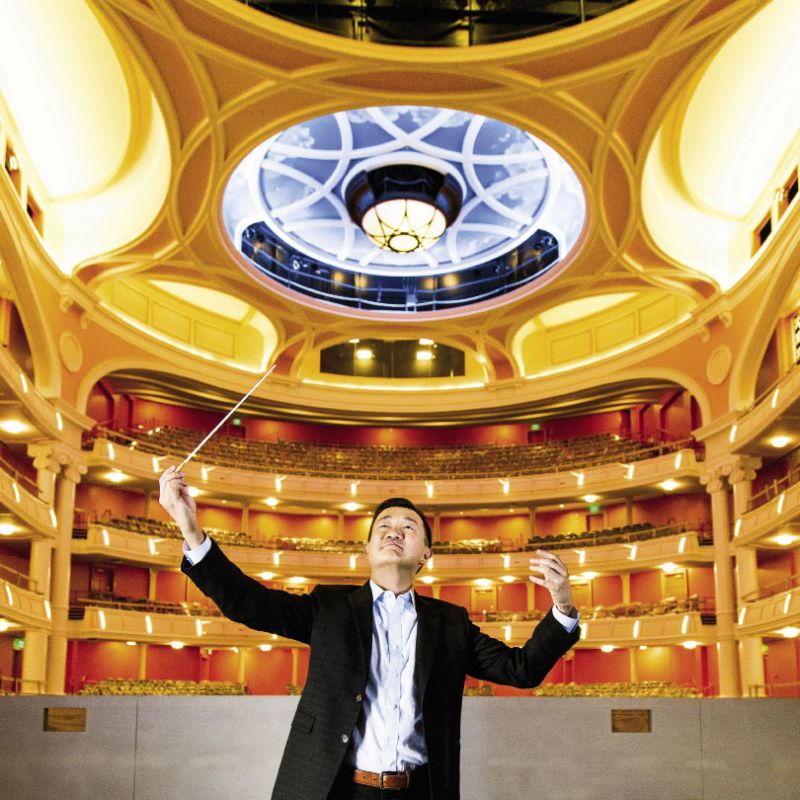 The Hong Kong native arrived this summer from New Jersey, where he was an associate professor and director of orchestra at Montclair State University. He still spends a night or two each week up north, serving as associate conductor of education for the Baltimore Symphony Orchestra and artistic director of its Youth Orchestras. He also conducts orchestras in Hong Kong a couple times a year. And during summers, he’s resident conductor of the Brevard Music Center in North Carolina.

The graduate of the University of Cambridge and the Peabody Conservatory of the Johns Hopkins University has added all of that—and too many other accomplishments to list—to his resume in less than a decade, after having spent 10 years as an attorney with a high-powered British firm. With the CSO’s first Masterworks concerts of the season slated for November 6 and 7, we caught up with him to learn more.

Childhood passion: I had wanted to be a conductor since I was probably eight—I recorded a Leonard Bernstein concert on TV and played it over and over. Like all good Hong Kong kids, I played piano and violin and sang. I wanted to go to music school, but my parents thought I should do something practical, so I studied economics at Cambridge.

Starting to conduct: In 1999, I moved to the Hong Kong office of my law firm and began playing violin for the Hong Kong Chamber Orchestra. One rehearsal, the conductor didn’t show up, so I filled in. I knew nothing, but I had passion. They invited me to conduct the orchestra. I began using my annual leave to attend conducting workshops in Europe.

The next step: I thought, “Maybe I should take a year off to study conducting.” I auditioned for the Peabody and was accepted.

Road to Charleston: In 2011, I conducted an opera by a Chinese composer at the Spoleto Festival. My friend, Yuriy Bekker—then the CSO’s concertmaster—and I met for a beer, and he suggested I apply for this job.

CSO excitement: We’ve hired four fantastic new musicians in the past year to complete our roster of core musicians. The orchestra is also growing, and with the buzz about the new Gaillard and new conductor—plus the fact that Charleston is such a desirable destination—we recently had almost 400 people apply to be on our guest musician list.

Classical music: You have to develop a taste for classical music; it isn’t about instant gratification. But the works that have endured are the really outstanding ones, and they have the ability to make people better. If you listen to the slow movement of Beethoven’s Emperor Concerto played by a great pianist, you will be changed.

Enticing an audience: In programming, I try to bring patrons something they really enjoy—maybe the symphonies they know well—and then introduce them to something that’s related but different, slowly broadening their tastes. I would never present something that hasn’t touched me.

On conducting: Your instrument is the orchestra. You have to believe in the music and show the musicians what it feels like. But you don’t want to micromanage. Sometimes, I have a concept of a piece of music, and the musicians give me something better; I take those ideas and run with them.

Hobbies: Tennis and golf; I look forward to playing all the great courses in Charleston.