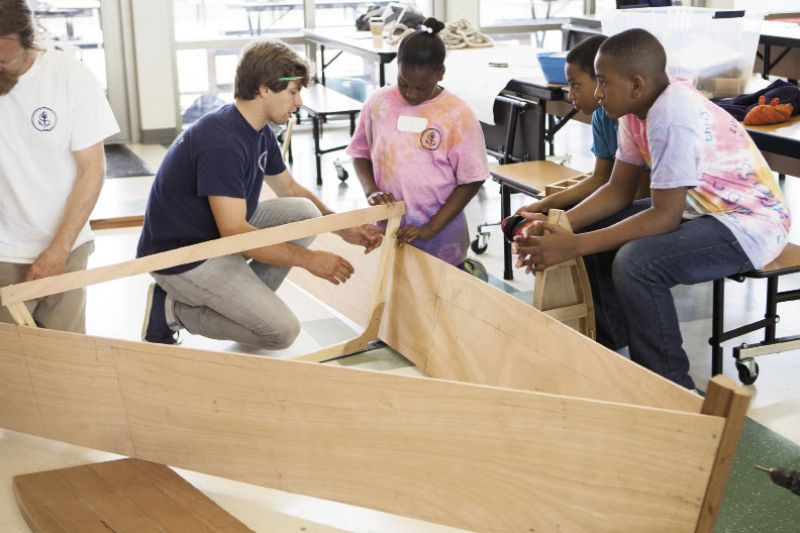 We’re all here for the water: That’s Prentice Brower’s take on the Lowcountry, as well as the story behind every job he’s ever had, from sailing teacher to Barrier Island Boatbuilders apprentice to his latest post at the Lowcountry Maritime Society (LMS). His maiden voyage as LMS executive director? After-school programs taught by volunteers dedicated to helping students connect with their heritage. “We want to open the doors to a maritime way of life,” Brower says.

Last spring, 40 fifth- and sixth-graders at Meeting Street Academy and Sanders-Clyde Middle School embarked on a figurative “semester at sea,” constructing their own rowboats and learning interdisciplinary lessons along the way. In addition to teaching maritime history, “We’re applying math and science to the real world,” Brower says. “I love watching students convert plans into full-size dimensions. When they realize they’re using math to actually do something, it’s awesome!” At the end of the school year, a launch party at Brittlebank Park gave the kids—many who’d never before been on the water—the chance to venture out in boats they’d built with their own hands.

While Brower’s quite the captain, community support keeps the operation afloat as it resumes programming this fall. Wilkinson Wood Works, for example, provides storage space and tools while LMS works toward a headquarters of its own. “Support is vital; the schools pay for a portion of the program, but we fund much of it,” notes Brower.

Ultimately, the nonprofit hopes to work with school districts to incorporate maritime education into curriculums throughout the Lowcountry: “The long-term goal is to have our students graduate high school with the skills they need to work in the industry,” Brower explains.