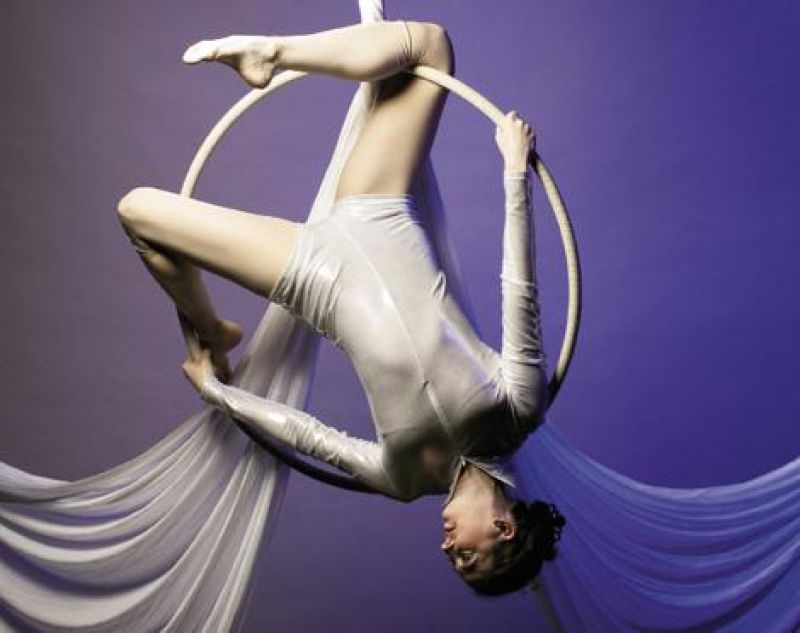 Julianna Gaillard Hane flies for a living. Not the friendly skies, mind you, but through theaters or gymnasiums—wherever she can hang from the rafters to perform aerial dance, a highly physical art that relies on the body’s strength and grace.

While studying dance at Winthrop University, the South Carolina native was asked to be in an aerial dance piece, and her world turned, well, upside down. “It made so much sense to my body and actually felt better than dancing on the ground!” she says. Upon graduating in 2004, Hane sought out additional training at the New England Center for Circus Arts (NECCA) in Vermont, studying aerial fabric, trapeze, and aerial hoop. Twirling and twisting through air has taught her to be patient, she explains, “as well as forgiving, bold, daring, persistent, inquisitive, and appreciative of life.”

In 2007, Hane headed to the University of Utah to pursue her M.F.A. in modern dance and three years later founded her performing company, Revolve Aerial Dance, which she brought to Charleston in 2010. Revolve specializes in circus apparatuses, such as aerial silks, slings, hammocks, and trapezes, upon which her troupe performs gravity-defying dances at arts festivals and events around the state. It’s dangerous work, which requires a heightened perspective—not only proficiency in rigging, but also recognizing its limitations. “How high the dancer can hang, how far they can swing without hitting stage lights—facing these logistical issues actually forces me to be more creative when translating my vision into reality,” the choreographer says.

In addition to her troupe’s high-flying performances, Revolve offers classes geared to both men and women, young and not so young, challenging their strength and flexibility and tapping into their creative expression. As Martha Graham famously said, “The body never lies,” and whether on the ground or in the air, dance is a complex language. Hane uses her training in Laban Movement Analysis, a methodology that studies and interprets human movements, to help students and aerialists become more versatile in their body language. “It helps them understand the how and why of body language, which improves the way they communicate an idea,” she explains.

When not in the studio or travelling for a show, the petite dynamo is busy teaching the art of dance, grounded and aerial, at the College of Charleston and in local high schools. She loves the mix of generations, because they have so much to learn from one another. “I feel like I arrived in Charleston at the perfect time,” she says. “The college has just created a new dance major, and I am thrilled to teach in the program.”

Hane believes that dance in Charleston is alive and well even though our resident ballet company has faltered. “I have been able to collaborate with so many talented artists, both professionals and students,” she notes. This month, Hane and company will be working with local modern dance group Annex Dance Company on her new dance for trapeze during the North Charleston Arts Festival. And with Spoleto Festival USA gearing up, she’s particularly excited about Compagnie XY, a cirque nouveau group. “I love to see what the human body can do,” she says. “For me it’s not about the tricks but the spaces in between—that’s where the emotion and meaning are present.”