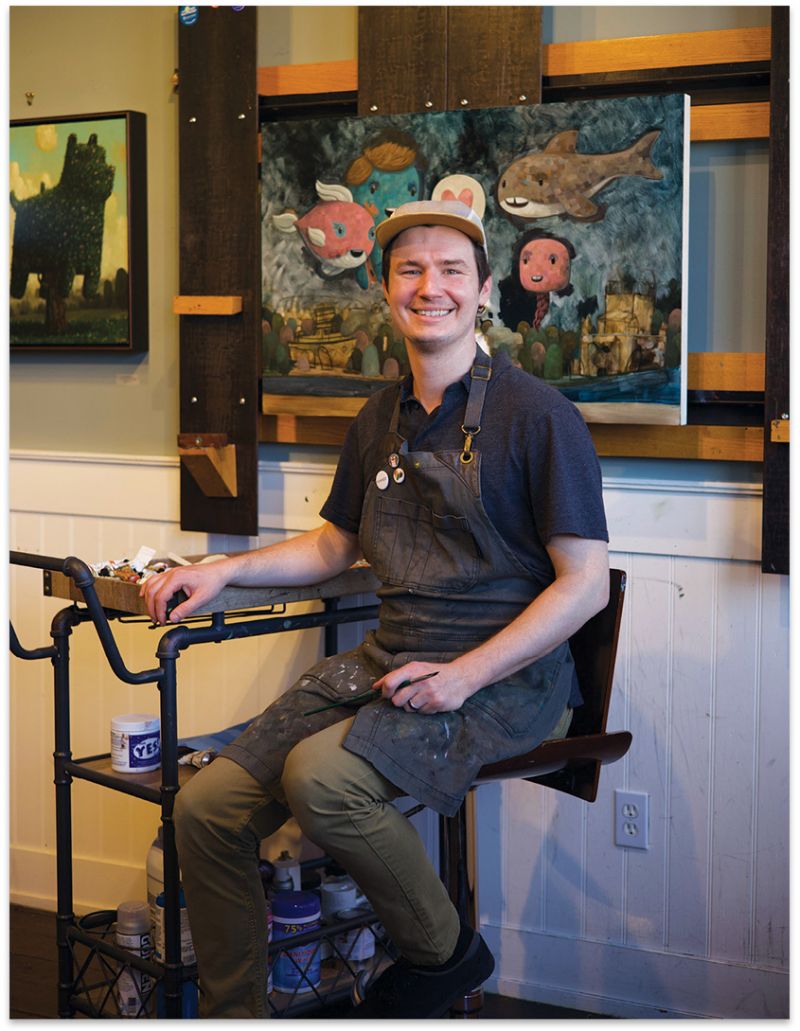 Nathan Durfee in his home studio.

The cats, octopuses, and other critters in Nathan Durfee’s whimsical paintings find themselves atop mountains, under water, nestled in tree branches, or lounging at home. But in the past two years, the acclaimed artist has added some recurring backdrops to his works.

Since moving to Wagener Terrace in March 2020, Durfee and his wife, Michelle, have become captivated by the landscapes on their nightly strolls with daughter, Clover, and their Maltese/Shih Tzu mix, Francis. “The sunsets at Lowndes Grove are absolutely amazing,” says Durfee, whose vibrant canvases have featured the marsh and waterway near the stately event venue on the banks of the Ashley River (266 Saint Margaret St., pphgcharleston.com/venues/lowndes-grove). He also has regular sketching sessions using the trees in Hampton Park as references. “The park is incredible. Being walking distance to that—it’s like having the greatest backyard ever. I feel like I’m on vacation.”

When the couple started growing out of their 400-square-foot downtown loft, high on their wish list was a neighborhood close enough to bike to Robert Lange Studios (2 Queen St., robertlangestudios.com), where Durfee’s creations take shape when he’s not working out of his home workspace. He calls Wagener Terrace “that sweet spot” of being near downtown without the downtown hassles of parking and congestion. That was important to the couple, as was a yard and “room to breathe,” but as they walked around the area, they kept finding more to love, Durfee recalls.

On certain days, the road surrounding Hampton Park closes to car traffic for the city’s Walk, Run, & Roll program, encouraging residents to get out and move.

Michelle had a connection to Wagener Terrace long before the couple stepped foot inside their charming Grove Street home, as her grandparents had lived in the area when they were younger. That history, along with the eclectic mix of old cottages and Craftsman bungalows, pushed the neighborhood to the top of their list. “We were thankful that a little starter home opened up,” says Durfee.

The Durfees moved in the week the COVID shutdowns started, initially making it hard to meet new neighbors. “You couldn’t really throw a housewarming party,” Durfee says. “But it was an interesting moment because no one was traveling; a lot of people weren’t working. We would walk by, and people would be having drinks in their front yard. That’s how we got connected with the neighborhood.”

They appreciate the mix of down-to-earth and interesting residents. “There’s such a variety of age groups—people who have lived here their entire lives and people who just moved in from New York, and we’re all kind of just gelling together,” he says.

For this issue’s “In the Neighborhood”—the second in a monthly series profiling fascinating Charlestonians and the communities they call home—Durfee shares some of his favorite spots.

(Left) The Harbinger; (Right) The cheeseburger at Herd Provisions

Date nights look a lot different since Clover was born last fall, but she tags along with her mom and dad for happy hour at Renzo (384 Huger St., renzochs.com), a nearby trattoria with a wood-fired oven. Durfee loves the Wrath of Kahan, a spicy, sweet pizza with pepper sauce, chorizo, and dates. “Sometimes you want a funky, weirder pizza,” he says.

Park & Grove (730 Rutledge Ave., parkandgrovechs.com), with its rotating menu of dishes that, Durfee says, are always spot on, is a go-to, especially since its recent “gorgeous” renovation. They’re also regulars down the street at Herd Provisions (106 Grove St., herdprovisions.com)—a farm-to-table eatery, with meats straight from owner Alec Bradford’s Leaping Waters Farm in Virginia. Durfee’s standing order is a cheeseburger and Brussels sprouts.

When strolling around the neighborhood, the Durfees like to duck into The Harbinger (1107 King St., theharbingercafe.com) for treats. The corner bakery and café serves salads, all-day breakfasts, and an impressive list of coffees and teas, but the cakes, cookies, and other house-made desserts take center stage. Babas on Meeting (804 Meeting St., babasoncannon.com) is another great spot for snacks and drinks, “caffeinated or cocktails,” says Durfee. His afternoon pick-me-up is the mocha with peanut milk, and if he’s done with work and wants to relax, he’ll order a gin martini and a baguette with whipped feta. “It’s like someone dropped a little bit of Paris right onto Meeting Street,” he says.

On Durfee’s to-do list is Harold’s Cabin (247 Congress St., haroldscabin.com), a quirky eatery inspired by the grocery/lunch counter that was housed in the same spot until 1950. “If I wanted to pretend I was cooler, I would mention Harold’s Cabin,” he jokes. “I’m angry at myself that I haven’t been yet because everyone tells me how amazing it is.”

It’s no surprise that Durfee is a regular at Artist & Craftsman Supply (981 King St., artistcraftsman.com). “It’s great to be able to just walk down the street to grab a paintbrush when I need one,” he says. He’s also happy to be just a few blocks from Monarch Wine Merchants (1107 King St., monarchwinemerchants.com). During a two-year stint in California, the Durfees celebrated their wedding anniversary at a Napa vineyard. For their last anniversary, he had the folks at Monarch special order a few bottles from the vineyard. “We were able to recreate the Napa experience at home,” Durfee says.

Another romantic adventure was the mini “babymoon” spa day the couple spent just outside the neighborhood at The Woodhouse Day Spa (10 Westedge, Suite 150, westedge.woodhousespas.com) when Michelle was pregnant. “It’s great having luxury experiences like that in your backyard,” he says.

Having the East Bay True Value hardware store (1409-A King St., truevalue.com) nearby motivates Durfee to tackle small home projects. “They’re also so helpful,” he says. “I’ll walk in with something like an odd-shaped screw from an old light fixture, and they’ll be able to help me find the right part. It’s like the local bodega but for building supplies.”

One neighborhood secret: the fully functioning post office (171 Moultrie St.) on The Citadel campus. “There’s never a line, everyone there is super friendly, and they actively try to help you,” says Durfee.

The art supply store isn’t the only neighborhood connection to Durfee’s craft. Just a few blocks away is Redux Contemporary Art Center (1056 King St., reduxstudios.org), where he often visits to get inspired by what other local artists are creating. The John L. Dart Library (1067 King St., ccpl.org) has frequent art and literary events, including readings at the Butterfly Book Nook (1020 King St.), a pocket park across the street. It includes a storytelling pavilion, a Little Free Library, shaded seating, murals by local artists, and gardens filled with butterfly-friendly blooms.

Every Saturday, a free shuttle connects the 10 breweries in the Charleston Brewery District, including Fatty’s Beer Works.

Durfee often tells out-of-towners to be on the lookout for Bill Murray. Durfee has yet to meet the comedy giant, surprising considering Murray’s ties to Wagener Terrace and frequent appearances at his Yarrum Properties (“Murray,” spelled backward) establishments, including Harold’s Cabin, Rutledge Cab Company (1300 Rutledge Ave., rutledgecabco.com), and Container Bar (2130 Mount Pleasant St., containerbarchs.com). The Durfees frequent the latter watering hole, which has a large outdoor patio and hosts live music, comedy shows, and food trucks. It was a perfect spot to get out during the pandemic, he says.

They also have a standing weekly date to meet friends at Fatty’s Beer Works (1436 Meeting St., fattysbeerworks.com). “Having the Brewery District a mile away is fantastic,” says Durfee. He likes to ride his bike there, but a free trolley travels between the 10 breweries (instagram.com/charlestonbrewerydistrict) every Saturday from 1 to 9 p.m.

On the other end of the neighborhood is Joseph P. Riley, Jr. Park (360 Fishburne St., milb.com/charleston), home to the city’s baseball team, the RiverDogs. The Durfees plan to catch a home game at The Joe this spring. “I grew up playing baseball, and although I don’t follow it as much as I did in the past, the RiverDogs stadium is family-friendly, so it’s a great way to spend an afternoon outdoors,” Durfee says. The opening game against the Myrtle Beach Pelicans on April 8 (followed by fireworks, like all Friday night home games) kicks off the 25th season at The Joe—yet another spot in the neighborhood for Bill Murray sightings, as he co-owns the minor-league team, too.

(Left to right) And The Water, And The Oil by Studio Union artist Natalie Hanson; The RiverDogs’s season opener at The Joe is on Friday, April 8; The Studio Union show at Redux Contemporary Art Center.

“We just walk around with smiles on our faces. It’s kind of crazy how many little parks and pockets there are,” he says, calling out the community garden at Corrine Jones Park (36 Marlow Dr., charlestonparksconservancy.org). There, the Charleston Parks Conservancy leases raised beds for growing veggies and flowers and offers public plots with produce being donated to local food pantries.

On Tuesday and Thursday evenings and Saturday mornings, Hampton Park closes to cars for its Walk, Run, & Roll program (charleston-sc.gov/Facilities/Facility/Details/81) to encourage activities such as running, biking, or using the park’s fitness trail exercise equipment. “You see so many strollers and dogs,” says Durfee. “It almost has that Second Sunday kind of vibe.”

Wagener Terrace’s roots lie in the spot that is Lowndes Grove. The property, acquired through a land grant in the 1700s, was originally called Orange Grove. The plantation house was destroyed by the British during the Revolution, rebuilt in 1786, and purchased in 1803 by US Rep. William Lowndes. Captain Frederick W. Wagener, a German grocer who went on to serve as chairman of an initiative to bring an exposition to Charleston, eventually bought the property. He made his house and land available to the exposition, held at the start of the 20th century in what is now Hampton Park. President Teddy Roosevelt visited the exposition and had dinner at the Grove house.

The city bought the exposition’s parkland—once the site of a horse racetrack—and, in 1903, named it after General Wade Hampton. It conveyed an undeveloped section of the land, called Rhett Farm, to the state to build a larger campus for The Citadel military college. Developer James Sottile bought Lowndes Grove in 1917 and began to subdivide it into residential lots, which eventually featured the charming homes that stand today. 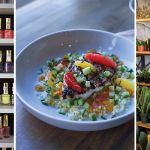 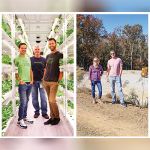 These local companies were each born from a cool idea and helped along with capital, business savvy, and a bit of luck 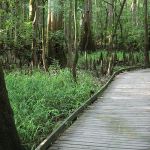