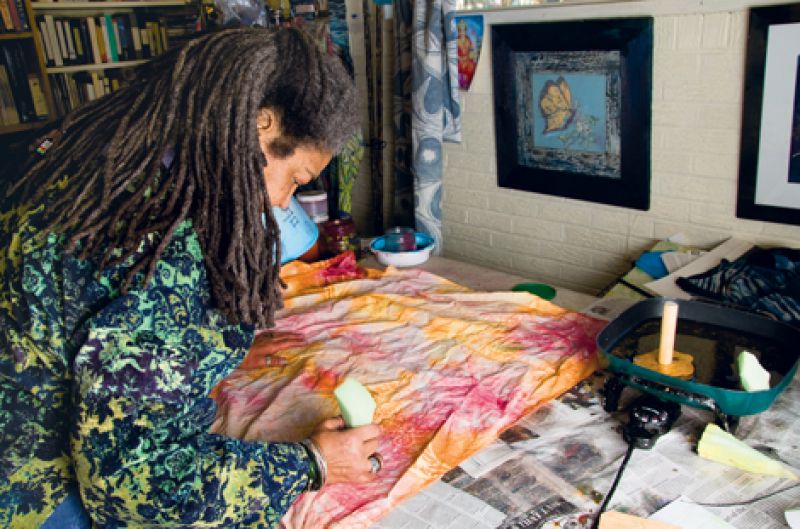 "I know that I am an indigo child,” says local textile artist Arianne King Comer. “And I know that my art is my journey.”
Considering her devotion to the ancient techniques of indigo dyeing and batik, it seems only natural that King Comer’s path led to Charleston, where history is saturated in the inky blue of this slavery cash crop. However, it’s the stops along the way that have shaped the old-world artisan into a visionary.

More than scenes from the Old South, her energy-filled fabric works depicting Gullah ancestors and plantation life are expressions of the artist’s connection to her heritage.

Before discovering her passion for the medium, the Howard University graduate began as an art teacher at a California mental hospital, then moved on to a youth detention center in Detroit. Her deeply troubled students found art class intimidating, so the creative thinker dubbed the period “enrichment class,” seeking to foster an environment where art became a form of therapy. “It wasn’t my job to know why my students were there, but I believe they were the voices of what was happening in society,” she recalls. “Art is a healing process and a way of communicating peace.”

Her journey also carried her overseas in 1992, when she received a grant from the United Nations to study batik under celebrated Nigerian artist Nike Olyani Davis. Traveling with the impression that she would be walking miles for water in a primitive village, King Comer was shocked to find herself instead part of a community that embraced her like a queen. She was given prime accommodations in Davis’ villa and welcomed by residents with drums and dance. “All because I was an artist,” she says.

She lived simply, spending only $35 a month, yet the time made her aware of her own vision and heritage, solidifying indigo as her calling. “I am a composite of three races: Irish, Cherokee, and Yoruba,” says the artist. “I believe that whoever I am comes from whoever I came from—in Nigeria, indigo is a color used in many cultures to honor that.”

While most artists put finishing touches on their canvases with black paint, King Comer commemorates her ancestors by using indigo as her final color. Today, her paintings are based on state archived pictures, which tell stories that she feels connect to her own mixed heritage. She has also manipulated her batiks into “textile trees” that have appeared at the Waterfront Gallery and the Old City Jail.

Still, King Comer knows that her artistic calling cannot be confined to a gallery or studio. Taking from her first experiences as a teacher, she returned to Africa in 2007 with the Charleston Rhizome Collective, a local promoter of diversity and community art, to conduct a batik and indigo workshop at the World Social Forum in Kenya. She now leads such exercises from her studio at the Old Navy Base, where she also furthers her own work.

King Comer may have landed in the Lowcountry, with its indigo-steeped history, but an ongoing process of self-discovery has tied her medium to her message of heritage and healing.