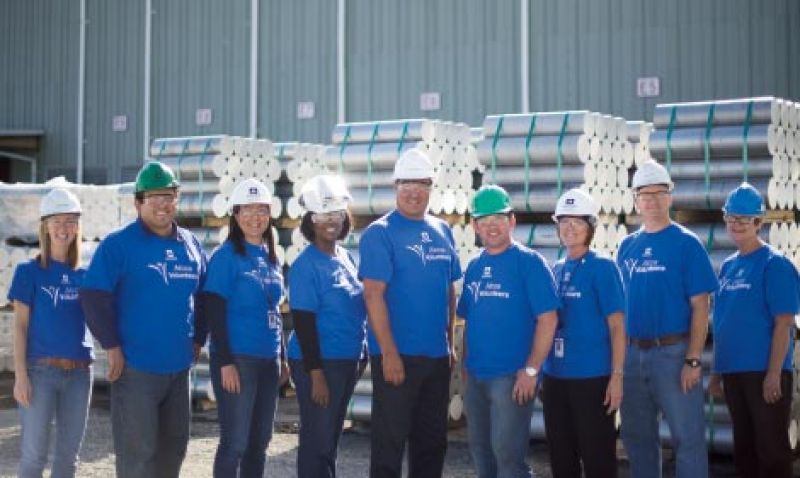 “We did several projects in one day: landscaping, digging a trench, reorganizing a huge storage building, painting picnic shelters, and building a dock at the man-made pond for the boys to jump off of during the hot summer days,” says Yvonne Infinger, an accountant for 23 years at Alcoa Mt. Holly, of a day spent at Eagle Harbor Boys Ranch in Summerville. This volunteer effort by more than 85 employees is merely one of the 20-plus projects a year that unite workers at the Goose Creek-based aluminum manufacturer with their community.

Since opening in 1980, Alcoa Mt. Holly has developed a philanthropic culture that is entirely employee-driven—from choosing which charity they want to benefit to recruiting coworkers and organizing programs. Workers here clock 7,000 volunteer hours annually, immersing themselves in a slew of projects, including a Toys for Tots campaign that not only raised $10,000 in toy donations but also saw some employees spend their Christmas morning delivering them to families in need. What’s more, when an employee gives at least 50 hours a year to a nonprofit, the Alcoa Foundation awards it a generous $250 Bravo! grant.

“I think that being part of the community in which we operate should be part of our DNA,” says plant manager Mike Rousseau. “Our employees are engaged in making the region a better place—it’s where they live, where they raise their families.”

Rousseau especially loves October, Alcoa’s Worldwide Month of Service. Last year, among the 13 different community projects they took on in October, they contributed $2,100 in employee donations to Crisis Ministries. The same month, two executives participated with coworkers at the Lowcountry Food Bank, surprising the organization with a $10,000 Alcoa Foundation grant.

Additionally, through matching the sweat equity of group efforts with $1,500 and $3,000 ACTION (Alcoans Coming Together in our Neighborhoods) grants, a whopping $25,500 was donated. Outside of volunteer-based projects, the Mt. Holly plant contributes $125,000 in donations and sponsorships annually, including startup costs for a Hanahan Middle School vegetable garden.

They call themselves Alcoans, and when you see this close-knit army coming, clad in matching blue shirts, you can be sure it’s on its way to somehow make a difference.

Big Money: Alcoa Foundation has awarded $1.4 million in grants over the last decade.