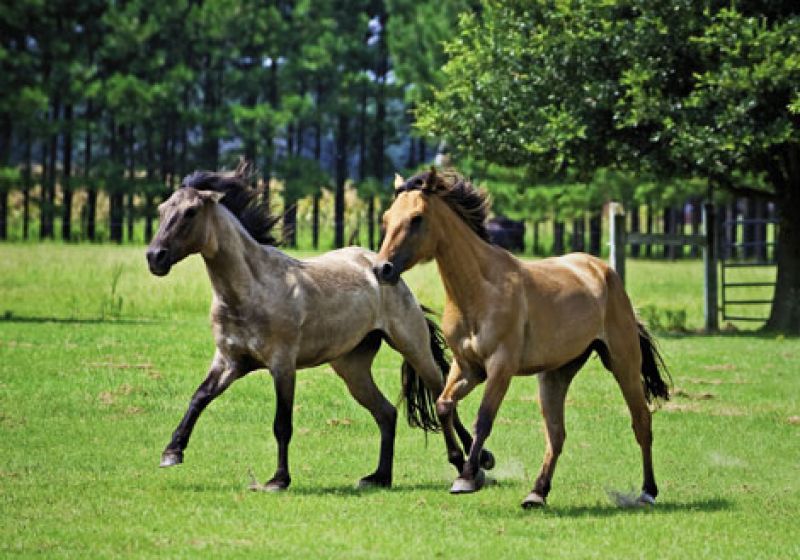 If asked to name an endangered species, many would identify an exotic animal—say a panda or tiger. Speak to members of the Carolina Marsh Tacky Association (CMTA), however, and they’ll tell you about a horse.
Even those well versed in all things equine may not be familiar with the Marsh Tacky, South Carolina’s official State Heritage Horse as of last summer. That anonymity could be due to the rare breed’s low population, estimated to be less than 150 until three years ago. Nowadays, thanks to the efforts of the CMTA, these spirited horses have another chance at the local stardom they once enjoyed.

Believed to have descended from horses brought to the Americas by Spanish explorers, “Tackies” lived in relative isolation along the South Carolina and Georgia coasts for hundreds of years, creating a breed entirely specific to the Lowcountry. The small but sure-footed beasts were once abundant, used by farmers and Gullah islanders for tasks from plowing fields to delivering the mail. Even General Francis Marion favored Tackies as his mount (their unique “Swamp Fox Trot” is named for him), and rumors hold that his troops utilized them to great advantage during the Southern colonists’ swampy guerilla warfare against the British. Tackies, unlike other breeds, have almost no fear of water and are adept at navigating our boggy pluff mud. “If they begin to get stuck,” says CMTA board member Jackie McFadden, “Tackies lie down on their sides, pull out their feet, and get back up. Most other horses would panic.”

If not for their levelheaded temperament, easygoing nature, simple care requirements, and ability to comfortably survive foraging, Marsh Tackies may have dwindled long ago. The invention of the automobile and farming machinery left little need for these gentle workers in everyday life. “Many were removed from the islands because of development; others were bred with various types of horses,” notes McFadden.

Luckily, some local horse lovers recognized the Tacky’s uniqueness and began conserving the beasts—if only accidentally. “A lot of South Carolina families kept Marsh Tackies for generations and continued breeding them without knowing they were endangered,” McFadden explains. During CMTA’s early days in 2007, members searched for Tackies across the state, pulling hair samples, doing DNA testing, setting standards, and eventually creating a stud book. Many breeders began new herds. Now, after three years, South Carolina has 257 official Marsh Tackies, and CMTA is hoping for a lot more. “We are extremely dedicated to and passionate about the breed’s survival,” says McFadden. “These horses are a part of history.”