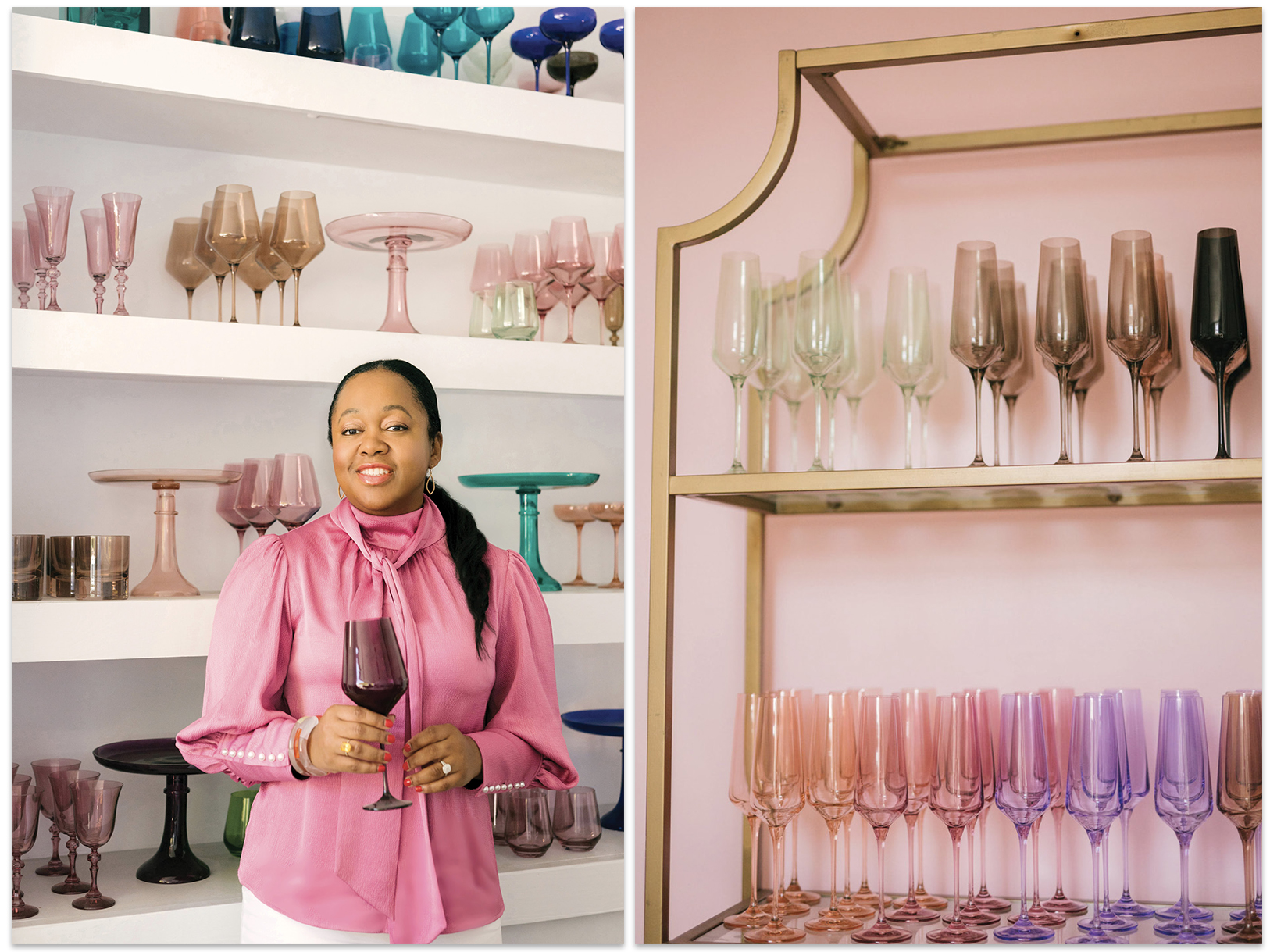 Stephanie Hall was a lawyer in Washington, DC, before moving back to her native Lowcountry, where in 2019, she launched her vintage-inspired colored glass company. Estelle glassware may be flying off the shelves, but you won’t find a jewel-toned pristine bar at her home, at least not yet. “With four young kids, we’re still more of a Solo cup household,” she laughs.

Tempted to splurge on curvy, sexy stemware in dreamy jewel-toned hues—even though you’ve got enough glasses already—just because they’re so gorgeous? Blame it on “Big Mama.”

Big Mama, née Estelle, was Stephanie Summerson Hall’s paternal grandmother who lived one street over from Hall’s family in Holly Hill. Every Sunday, she baked a decadent dessert to have on hand should company drop by. “Back then, it was common for people to go visiting on Sunday, and my grandmother wouldn’t be caught dead without something homemade, fresh, and tasty for her guests,” her granddaughter recalls. Picture a luscious vanilla pound cake topped with strawberry Jell-O and fresh whipped cream—Big Mama’s specialty. And now picture it gracing a vintage, colored glass cake stand.

Big Mama’s impeccable hospitality lives on in Estelle Colored Glass, a start-up founded by Hall in 2019. In only two years, the company’s line of elegant glassware in a rainbow of colors has rapidly expanded from wine glasses in cobalt blue, mint green, amber, rose, a soft blush pink, and lavender to a fully stocked bar, including stemless wine glasses, high balls, martini glasses, decanters, and flutes, plus cake stands, also in forest green, amethyst, and yellow. Hall commissions a century-old glass artisan manufacturer in Poland to craft her original designs inspired by vintage forms, but in modern colors. “I consider them pieces of jewelry, honestly. I think they’re pretty without anything in them,” she says. “To me, the decanter is more like artwork. I mean, who really uses a decanter?” Evidently, plenty of people.

“People buy your story before they buy your product. The fact that we’re in Holly Hill, based out of a 70-year-old warehouse where my dad once worked, five minutes from where I grew up, resonates with customers. They love the small business allure.” —Stephanie Summerson Hall, Estelle Colored Glass founder & CEO

Estelle sales are up 600 percent over last year, with 70 percent of glassware being sold direct-to-consumer and the other 30 percent from sales in locally owned gift stores, including Gwynn’s of Mount Pleasant, Fritz Porter, and GDC, among others. The line also has expanded to national online retail outlets, including West Elm, Nordstrom, and Anthropologie. Growth has been rapid, and somewhat surprising for the mother of four children, aged 16 to four, who never set out to be a wine glass connoisseur. Hall, an attorney by training, practiced law for 10 years in Washington, DC, before she and her husband decided to move back to South Carolina. “We wanted a different quality of life, one with more say-so in how we allocated our family time. I wanted our kids to have a similar upbringing to mine,” she says, “Plus, I realized I liked business more than law. I’m a numbers person.”

She and her husband started Ruth’s House Event Rentals, which is ongoing, but Hall began looking for an additional online side business to fill in the gaps given the seasonal ebb and flow in event planning. After several trials and errors (ask her about the margin on high-end, artisan-made gold scissors), Hall decided to focus on selling one product line from a single vendor, and the Polish glassware fit the bill, thus Estelle Colored Glassware, featuring Hall’s designs in her custom-formulated colors, was born. Thanks to the brand’s heartfelt nod to her grandmother’s legacy, the company has “struck a chord,” says Hall. “People buy your story before they buy your product. The fact that we’re in Holly Hill, based out of a 70-year-old warehouse where my dad once worked, five minutes from where I grew up, resonates with customers. They love the small business allure.”

Meanwhile, a supportive entrepreneur culture, especially among women in Charleston, resonates with Hall. Early on, wisdom shared by Carrie Morey of Callie’s Hot Little Biscuit was invaluable. “Carrie’s advice was that no part of the business should depend on me on a daily basis. So I’ve invested in human capital and built a team of competent, talented people. I see my role as promoting the brand, telling the story, and I’ve learned to delegate all the other parts. It’s all been soup in the making,” she laughs. “Now, it’s just soup in pretty glassware.”

Estelle Colored Glass At a Glance

Founded: 2019
Start-up investment: About $500,000
Growth: Nearly 600 percent from 2020 to 2021, to date
Fun Fact: The mixed color stemware set is the most popular item, even though it wasn’t on the initial product list.
Learn More: estellecoloredglass.com