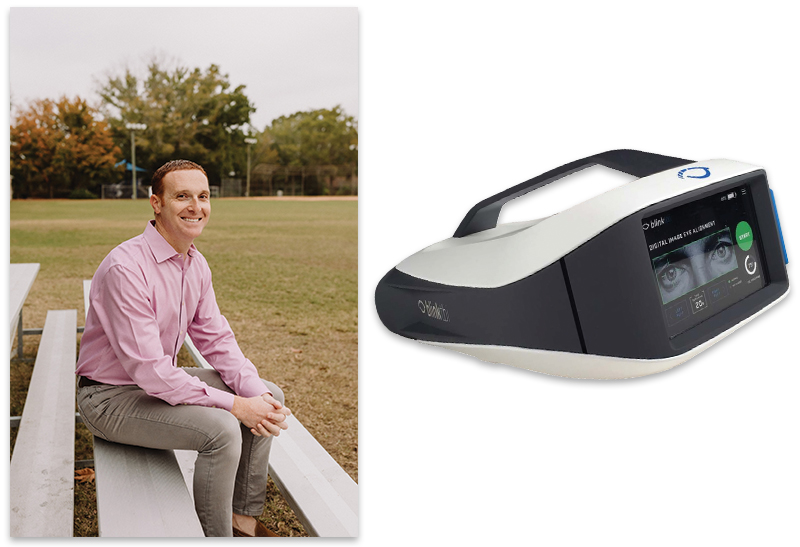 Detecting concussions and neurological diseases in the blink of an eye

Ryan Fiorini’s son was three-years-old when he fell off a dock, knocking his head on a steel ladder before tumbling into the water. Save for some initial clinginess and a couple of lumps on his head, the little guy seemed back to normal in no time. His parents, on the other hand, were concerned. “He was clearly concussed,” Fiorini says. “But one of the things that was just really bothering me was there was no way to follow his progression.”

A one-time semipro hockey player, Fiorini, 44, is all too familiar with taking knocks on the head. “Usually I would skate back to the bench, sit down, and spray water on my face, and that ‘fixed’ it.” Research has since revealed that multiple concussions over a lifetime can cause permanent damage to the brain. The diagnosis—a verbal test administered by a medical professional, or in the case of sports, an athletic trainer—is largely subjective, and measuring progress after a concussion is more of the same.

Not long after his son’s accident, Fiorini—a biotech entrepreneur with a PhD in immunology from MUSC and an MBA from The Citadel—was considering a new venture. Built around a concept developed at MUSC with the Zucker Institute of Applied Neurosciences, the technology could detect if a person had suffered a traumatic brain injury by evaluating the rate at which they blinked. With his son’s recent experience in mind, Fiorini and his partner, Doug Carnes, a professor he met while at The Citadel, licensed the idea and founded Blinktbi in July 2017.

Less than a year later, Blinktbi had a prototype of a device now known as “EyeStat” that delivers data based on a patient’s blink reflex stimulated by a light puff of air in the corner of the eyes. Using infrared light and a high-speed camera, EyeStat records a host of parameters in the patient’s eyelid movement. “It’s evaluating about 50 different things,” says Fiorini. “When the air touches the eye, how long does it take for the blink to occur? How fast is the eye closing? Which eye closes first?” A concussion, for instance, speeds latency, or the time required for the signal to get from the eyelashes to your brainstem and back to your eyelid, telling it to close. In effect, the device can help to detect a concussion—a game changer on any sports field, from youth football to pro soccer.

“We are looking for a fingerprint for these diseases, and so far, we are finding it with almost 100 percent certainty.” —Ryan Fiorini, Blinktbi co-founder & CTO

By February 2020, Blinktbi was raring to go. “We brought in a sales team to go sell to every school and sports team in the world,” Fiorini says. “And then, two weeks later, every sports team and school shut down.”

Fortunately, EyeStat’s potential applications went beyond the sidelines. After meeting with the board of directors, Fiorini pivoted to focus on the diagnosis of neurological diseases, such as Parkinson’s and Alzheimer’s, both of which have been connected to the blink reflex. Today, the device is being used by the Migraine Treatment Center in Mount Pleasant to measure patients’ progress. Clinical trials using data from scans of Parkinson’s patients show promise in being able to diagnose or track the progression of the disease. Blinktbi is also conducting a study with patients taking ADHD medicines in hopes the system can help diagnose ADHD. “We are looking for a fingerprint for these diseases, and so far, we are finding it with almost 100 percent certainty,” Fiorini says.

A newer portable version of EyeStat that resembles a virtual reality headset can use light or sound in addition to air—depending on the disease it’s tracking—to prompt a blink that can be read in real time. The company is expecting to submit documents this month for FDA approval, which will take about four months.

As promising as EyeStat is, Blinktbi’s business model isn’t based on sales of the device, rather, its value is in the data collected from clinical trials, which could prove to be a very useful metric to any number of potential buyers. “We are a data-driven company,” says Fiorini. “The data that we get from every single trial is where all of our value is.” For example, pharmaceutical companies may be interested in data that measures the progression of Parkinson’s or Alzheimer’s—notoriously difficult to track. “Our hope is to say to these companies, ‘You are coming up with treatments, but there’s no objective way to know if they’re working,’” explains Fiorini. “We give objective data.”

Like most biotech start-ups, the end goal is to go public or be acquired. For now, Blinktbi plans to go public in 2023. In the meantime, sports teams are playing again, and several major leagues and doctors’ offices are waiting in the wings for the next generation of its device. As for Fiorini’s son, now seven, he’s playing tackle football and lacrosse, with an EyeStat at the ready on the sidelines.

Blinktbi’s research shows that by emitting a puff of air, flash of light, or sound to stimulate a blink reflex, the latest generation of its EyeStat device can evaluate eyelid movements that indicate a traumatic brain injury or the progression of neurological diseases such as Parkinson’s or Alzheimer’s.

Blinktbi At a Glance
Founded: 2017
Start-up investment: $10 million to date
Growth: From three employees in a 1,400-square-foot office to 14 in a 5,000-square foot space
Fun fact: Its board of directors includes Dallas Mavericks president Cynt Marshall and Indiana Pacers head coach Rick Carlisle is on its board of advisors
Learn more: blinktbi.com

>>RETURN TO THE MAIN ARTICLE