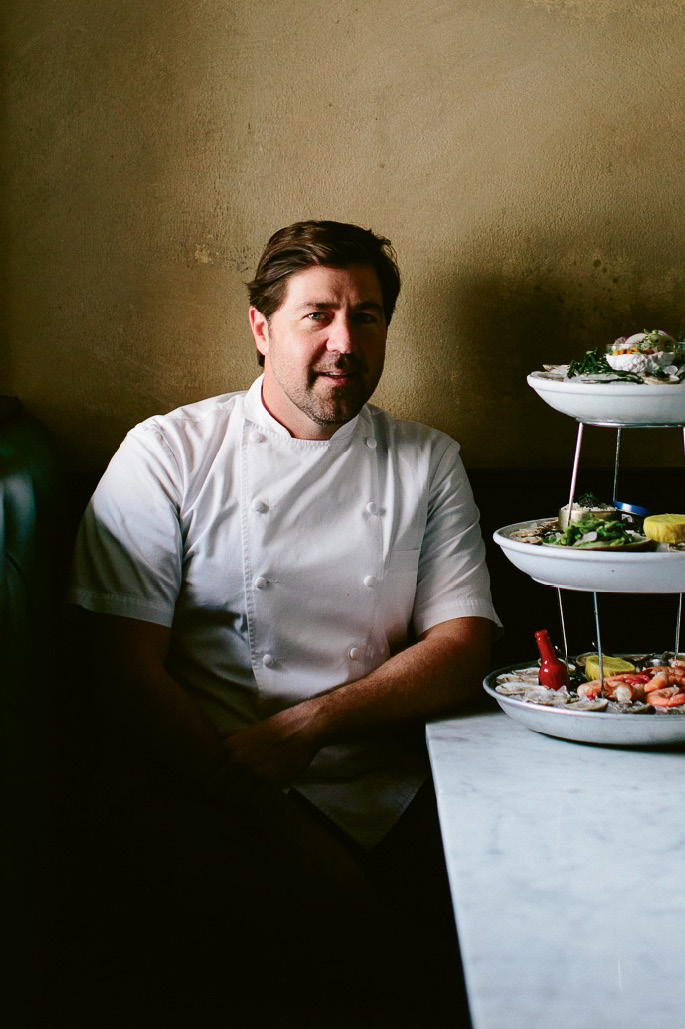 When was your first time—the first time you tasted a Lowcountry oyster? For chef Mike Lata, it was shortly after moving here in 1998. Lata had worked in kitchens in Boston, New Orleans, Atlanta, and France, so needless to say, he had tasted plenty of oysters “from off” (Charlestonese for “not from here”).

One evening, while living on Folly Beach, Lata took a date to a popular local seafood shack called Bowen’s Island Restaurant, a secluded locale at the end of a winding dirt causeway kissed by high tides on a full moon. Upon entering, Lata passed by a vintage jukebox and dusty stacks of periodicals, paid admittance to the Oyster Room, and sat transfixed before a crackling fire pit where Henry Gilliard shoveled oysters onto a warped sheet of steel suspended over open flames. The oysters clattered against metal, then hissed and sizzled beneath a soaked crocus sack, steam dancing across the scorched cement-block wall and illuminating the graffiti of countless names carved or scribbled by generations of Bowen’s devotees.

Then came the moment of truth. Gilliard shoveled the hot oysters directly onto waiting tables. Catching the hinge with his knife to pry it open, Lata released the oyster from its shell and popped it into his mouth. “I remember it was cooked just enough,” he says. “I bit into it, and its juice poured into my mouth, almost like a soup dumpling. And I said to my date, ‘This is the single most important seafood moment I’ve had in my life.’ The taste was amazing, the setting amazing. It was remarkable to me how great the oysters tasted with nothing on them whatsoever.” Thus Lata caught on to something locals already knew well. Maybe it’s the hint of pluff mud, waft of spartina grass, or salty liquor of brackish estuaries—our oysters taste like home.

Since then, Lata’s name has linked to multiple James Beard nominations, finalist rounds, and coveted gold medal awards. His restaurants FIG (Food Is Good) and subsequent fancy seafood hall The Ordinary helped raise our consciousness and our standards first for farm-to-table then seato-table dining. In 2006, Bowen’s Island Restaurant won a James Beard Award as well. Accepting the award for “American Classic,” third-generation owner Robert Barber Jr. stood before the crowd wearing a tuxedo and white shrimp boots to honor the watermen responsible for harvesting fresh local seafood. Five months later, the restaurant, founded in 1948 by his late grandmother May “Ma” Bowen, burned down. Barber rebuilt, and Bowen’s is again business as usual, now under the helm of fourth-generation Hope Barber McIntosh.

Bowen’s continues an oyster roast tradition practically as old as human habitation on the coast itself. Our barrier islands teem with the ghostly remnants of ancient Native American shell rings, some of which contain charred shell carbon-dated to more than 4,000 years.

Three such shell rings, visible from satellite imagery, form a protected National Historic Landmark on Fig Island near Botany Bay. (It is worth noting that Fig Island does not appear on Google Maps, and preservationists would like to keep it that way, as many other such rings have been plundered for shell over the centuries.) Just beyond Fig Island’s extensive marsh, floating beneath the water’s surface, are a series of wire-mesh cages containing hundreds of thousands of growing oysters raised by Barrier Island Oyster Co. The bivalves fatten up on naturally occurring, nutrientrich, microscopic plant matter plentiful in Lowcountry waters. Each winter, as temperatures cool and marsh grass turns from gold to brown, one acre of spartina yields two tons of food for these oysters to savor.

Jared Hulteen and Josh Eboch don’t mind their daily commute at all, although they occasionally have to slow down their flat-bottom skiff for schools of dolphins. Hulteen used to work for our state’s Department of Natural Resources (DNR), which serves as the front line for shellfish conservation and management. While there, Hulteen oversaw educational programs on the importance of oyster shell recycling and the rebuilding of shoreline oyster reefs. Now he focuses on cultivating oysters for his and Eboch’s Barrier Island Oyster Co. to be sold to raw bars downtown. Their boutique single, Sea Cloud, pays homage not only to a historic plantation on nearby Botany Bay but also to the pristine color of its shell, perhaps a result of the oyster’s positioning at the top of the water column, far removed from the silty bottom.

One of Hulteen’s DNR contemporaries, Peter Bierce, likewise moved on from shellfish restoration and mariculture management into the oyster business, forming Charleston Oyster Farm with his twin brother, Thomas, and their partner, Caitlyn Mayer. The trio operates out of the old Backman’s Seafood store on Sol Legare where the landline still rings routinely for Mr. Backman, who died two years ago. Thomas Bierce has made slow progress in renovating the Backman dock, which was decimated by successive hurricanes. He hopes to restore it as a working waterfront for the community. In the meantime, the group launches from the Sol Legare landing, boating the short distance to their “offbottom” farm downstream.

Using a battery-powered winch, the brothers hoist up cages and clean them off on-site by blasting recycled creek water, an environmentally friendly practice that returns all of the interlopers (like shrimp and crabs and baby fish that love to hide out among the oysters) to their native habitat. The partners then count and inspect the singles on a sorting table, selecting their favorites for area restaurants and returning others to continue fattening in the wild. The off-bottom cages give the oysters room to tumble in the Stono River’s natural currents and thus to form a deep, cup-like shape.

Both companies emphasize the need to educate the public about the value and safety of oyster farming. “This is not fish farming,” says Hulteen. “We are not going out and catching anchovies off the coast of Chile and depleting the trophic levels of the natural food chain to make into feed. Our oysters take all the food they need from natural waterways.”

Furthermore, oyster farms require no antibiotics or chemicals. Frank Roberts of Lady’s Island Oyster uses Mother Nature to combat growth of seaweed or algae, which if left unchecked can clog up his cages. At carefully timed intervals, he flips the cages to expose them to the sun’s rays in order to burn off unwanted growth and keep his oysters clean. “The sun is free,” says Roberts.

Roberts’s oyster hatchery is now key to South Carolina’s burgeoning mariculture industry, but he credits Julie Davis of the South Carolina Sea Grant Consortium for being instrumental and indispensable. “She has a Master’s in oysters. Did you know there was such a thing?” he laughs. With Davis’s knowhow, Lady’s Island Oyster is the first and only licensed oyster hatchery in the state, and it’s committed to supplying a growing number of farms up and down the coast. Last year, the company produced just shy of five million oysters, and sold every last one of them. “We needed eight million to keep up with demand,” says Roberts. “And there’s a guy in Hong Kong who wants me to ship him 20,000 mature oysters a week, at a cost of five dollars apiece [including shipping]. We haven’t done it yet. We need to grow our population. As it is, we can’t satisfy Charleston and Hilton Head.”

Farming may be the large-scale future of local selects, but meanwhile, plenty of harvesters still work their beds the oldfashioned way. Jamie White, who harvests for Bowen’s Island Restaurant, uses a lightweight welding hammer with a sharp edge to chisel clusters apart. He rakes beds to spread oysters around for more breathability and access to food. “When oysters get too crowded,” explains White, “they bunch up and can’t open up to feed. Some of them die.” An uncultivated, wild bed gets knotted up, its growth stunted. Responsible harvesting is key.

“Grab what you want to keep and knock the smaller ones off,” concurs Jeff Spahr of Charleston Oyster Company, who handharvests almost 1,000 acres of oyster leases in the Bulls Bay area. “When you remove larger oysters for market, you’re giving smaller ones better access to food. When you walk over the beds, the crunching and crushing of your boot actually triggers the oyster to thicken its shell, to regenerate, to deepen its cup. For each oyster you break loose, another can attach and grow. So it’s exponential. Each morning when my boat leaves the dock, I say to myself, ‘Let’s do some good today.’”

Vernon Peers is a delivery man for Lady’s Island Oyster. He knows that when he arrives in Charleston, some of our most discerning chefs will ask him point-blank, “How are they tasting today?” So before he gets in his truck, he shucks a few, savors them for due diligence, washes them down with coffee, and thinks about the sign hanging behind the bar at The Ordinary. On it, a quote from American novelist Tom Robbins reads, “Eating a raw oyster is like French-kissing a mermaid.” He likes that. He likes that very much.